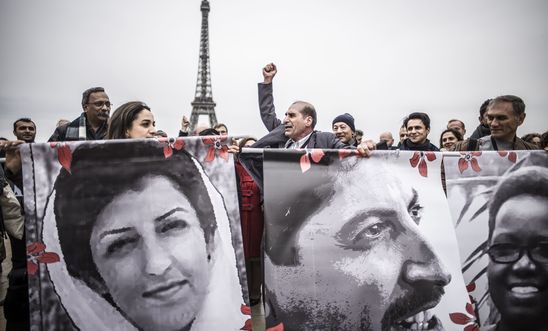 Human rights defenders from across all corners of the world gathered this week in Paris for the Human Rights Defenders World Summit, to develop a plan of action for how to protect and promote the work of activists fighting for rights, 20 years on from the first UN Declaration on Human Rights Defenders.

After three days of discussions and strategy development spanning regional and global issues, environmental rights and women human rights defenders, and the increasing attacks on human rights defenders everywhere, the momentum culminated in the presentation of a landmark action plan which will be taken to the UN in December.

UN High Commissioner for Human Rights Michelle Bachelet, who spoke at the opening ceremony, said: "What human rights defenders teach us is that all of us can stand up for our rights and for the rights of others, in our neighbourhoods, in our countries and all over the world. We can change the world.”

The Summit discussed calls on Governments, corporations, international financial institutions, donors and others, including the adoption of national governmental action plans, implementation of legislation to legally uphold the UN declaration, protecting defenders as a priority in foreign policy and prioritising the protection and work of women human rights defenders, LGBT+, indigenous rights defenders and other marginalised defenders.

Kumi Naidoo, Amnesty International’s Secretary General, said: “The level of danger facing activists worldwide has reached crisis point. Every day ordinary people are threatened, tortured, imprisoned and killed for what they fight for or simply for who they are. Now is the time to act and tackle the global surge in repression of human rights defenders.”

The closing ceremony took place at the Palais de Chaillot, where the Universal Declaration of Human Rights was signed 70 years ago. The 150 defenders gathered together to set out the Action Plan and pay tribute to the men and women who work tirelessly to defend human rights around the world.

Among those in attendance over the last three days were Alice Mogwe, Secretary General of FIDH and the Director of Botswana Ditshwanelo; Pulitzer Prize-winning journalist Matthew Caruana Galizia, who is calling for justice after his mother, Daphne Caruana Galizia, was assassinated one year ago in Malta and Anielle Franco, who is bravely campaigning on behalf of her sister, Marielle Franco, a Brazilian activist and elected councillor who was shot dead in her car seven months ago.

Hina Jilani, President of OMCT, founder of the Human Rights Commission of Pakistan, and the first UN Special Rapporteur on the situation of human rights defenders said: “States have never given us space. It is because of human rights defenders that there is space for civil society. Seeing you all here engaged in defending human rights, I am not too pessimistic. As a movement, we have never been as global as we are now. But we have to be clear to states: you need to live up to the challenge and speak out for defenders. Human rights don’t come for free.”

In 1998, governments adopted the Declaration on Human Rights Defenders to acknowledge the key role of human rights defenders. Despite progress in some areas, many governments are continuing to fall short of their commitments 20 years on from the first Summit and the global context in which human rights defenders operate in has become increasingly challenging. Democratic values are under threat and systemic corruption, extreme inequality and discrimination, religious fundamentalism and extremist policies are all on the rise. Alongside this, we have seen a concerted effort to undermine, discredit and kill human rights defenders. In 2017, at least 312 human rights defenders were assassinated, twice as many as in 2015, almost all with impunity for the perpetrators. The Action Plan hopes to tackle these injustices and support Human Rights Defenders to continue their critical work in a safe environment.