Women across Europe failed by 'dangerous and outdated' rape laws 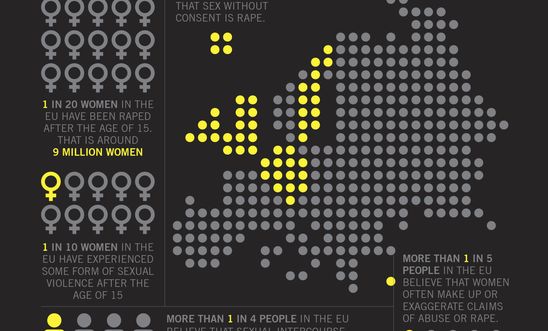 Europe’s inadequate and ineffective rape laws are “dangerous and outdated” Amnesty International said today as it published a new review into rape legislation across the continent.

The in-depth analysis of 31 European countries found that only eight countries have consent-based definitions of rape - Ireland, the UK, Belgium, Cyprus, Germany, Iceland, Luxembourg and Sweden. The vast majority still do not legally recognise sex without consent as rape, only when physical violence, threat or coercion is involved.

Amnesty’s review explores the widespread threat of violence against women across the EU. The latest data shows at least one in 20 women have been raped since the age of 15 – an estimated 9 million women.

Flawed legislation and a dangerous culture of victim blaming is also perpetuating impunity across Europe. A recent survey shows that one in three people believe that sex without consent may be justified “in certain circumstances”, including if the person is drunk or under the influence of drugs, voluntarily going home with someone, wearing revealing clothes, not saying “no” clearly or not fighting back.

Legislation in certain European countries even classifies rape without consent as a separate, lesser offence. In Croatia, sex without consent is still seen as a less serious offence with a maximum of five years in prison as opposed to ten years for rape. In Malta, legislation regarding sexual offences are framed around “crimes affecting the good order of families”.

Despite its consent laws, the UK continues to perform badly in its conviction of rape cases. On average, one in 10 (11%) women in the EU have reported experiencing some form of sexual violence, with this number leaping to one in seven (14%) UK women, placing the UK in the joint top five countries for the most amount of sexual assaults recorded.

According to the Crown Prosecution Service annual report, there has been a 23% drop in the number of rape cases charged last year (2,822 charged in 2017/18 compared with 3,671 in 2016/17). News reports suggest senior prosecutors have been advised to ditch ‘weak rape cases’ in an effort to improve annual conviction figures.

“Europe’s inadequate and ineffective rape laws are dangerous and outdated.

"Despite the definitions of rape in the UK being compliant with international human rights standards, the Government has a duty to ensure access to justice for rape survivors is a reality.

“Unwillingness to prosecute cases based on past experience is failing the most vulnerable victims – this is unacceptable. We need to see an independent review of the impact of the changes in Crown Prosecution Service’s practice, as well as a full review of how the whole justice system deals with rape.”

Over the past year, women across Europe have come together to express their outrage about unjust rape cases and demand better protection from their governments.

In April, protests broke out in Spain after five men accused of the gang rape of a woman were instead found guilty of the lesser charge of sexual abuse - despite the court ruling that the woman had not consented to sex.

Women in Ireland have recently been posting photographs of their underwear under the hashtag #ThisIsNotConsent to protest against a defense lawyer presenting the 17-year-old victim’s choice of underwear to the jury in a rape trial.

This Sunday, women in Denmark are expected to protest in at least four different cities to demand change in legislation to ensure that sex without consent is rape.

“Although movements like #MeToo have inspired many women to speak out about their experiences, the sad fact is that rape remains hugely underreported in Europe.

“Women’s fear of not being believed is confirmed time and time again, as we see courageous survivors who do seek justice frequently failed by outdated and harmful definitions of rape in law and treated appallingly by justice officials.

“Laws have the power to enable justice and influence attitudes. Surveys show that many people still believe it’s not rape when the victim is drunk, wearing revealing clothes or not physically fighting back.

“Sex without consent is rape, full stop. Until governments bring their legislations in line with this simple fact, the perpetrators of rape will continue to get away with their crimes.”