US/UK: Julian Assange's 'politically motivated' extradition must not go ahead 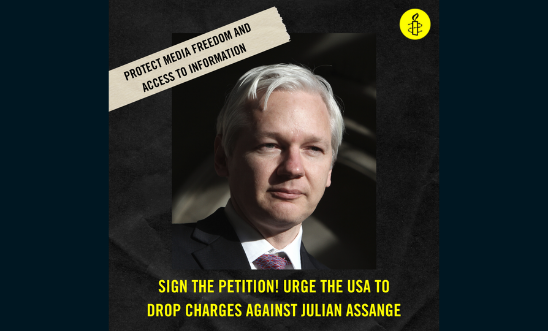 ‘This disingenuous appeal should be denied, the charges should be dropped, and Julian Assange should be released’ - Agnès Callamard

Ahead of an appeal hearing against the decision by the High Court in London not to extradite Julian Assange to the USA, Amnesty International calls on the US government to drop the charges against him and the UK government not to extradite him but release him immediately.

The call by Amnesty follows an investigation by Yahoo News revealing that US security services considered kidnapping or killing Julian Assange when he was resident in the Ecuadorian embassy in London. These reports further weaken already unreliable US diplomatic assurances that Assange will not be placed in conditions that could amount to ill-treatment if extradited.

“Assurances by the US government that they would not put Julian Assange in a maximum security prison or subject him to abusive Special Administrative Measures were discredited by their admission that they reserved the right to reverse those guarantees. Now, reports that the CIA considered kidnapping or killing Assange have cast even more doubt on the reliability of US promises and further expose the political motivation behind this case.

“It is a damning indictment that nearly twenty years on, virtually no one responsible for alleged US war crimes committed in the course of the Afghanistan and Iraq wars has been held accountable, let alone prosecuted, and yet a publisher who exposed such crimes is potentially facing a lifetime in jail.

“The US government’s unrelenting pursuit of Julian Assange makes it clear that this prosecution is a punitive measure, but the case involves concerns which go far beyond the fate of one man and put media freedom and freedom of expression in peril.

“Journalists and publishers are of vital importance in scrutinising governments, exposing their misdeeds and holding perpetrators of human rights violations to account. This disingenuous appeal should be denied, the charges should be dropped, and Julian Assange should be released.”

The appeal hearing, scheduled on Wednesday, is expected to consider five grounds of appeal by the US, including the reliability of assurances offered by the US after a lower UK court ruled against Assange’s extradition in January this year. Amnesty has concluded that the assurances are unreliable.

The US charges allege that Assange conspired with Chelsea Manning to illegally obtain classified information. They want him to stand trial on charges under the Espionage Act and the Computer Fraud and Abuse Act in the US where he could face a prison sentence of up to 175 years.

The US government’s indictment poses a grave threat to press freedom both in the United States and abroad. The conduct it describes includes professional activities undertaken by investigative journalists and publishers on a daily basis. If Julian Assange’s extradition is allowed, it would criminalise common journalistic practices and permit the US, and possibly other countries, to target publishers and journalists outside their jurisdictions for exposing government wrongdoing.

The US extradition request is based on charges directly related to the publication of leaked classified documents as part of Julian Assange’s work with WikiLeaks.