USA: pulling out of arms trade treaty would 're-open floodgates' on arms sales 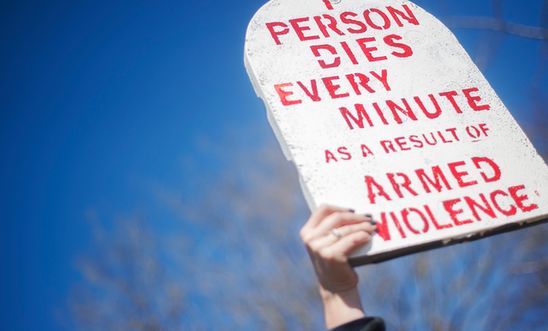 An Amnesty campaigner holds a placard outside the White House in 2013, calling for a comprehensive global Arms Trade Treaty © JIM WATSON/AFP/Getty Images

Responding to reports that the USA may withdraw its signature from the international Arms Trade Treaty (ATT), Adotei Akwei, Amnesty International USA’s Deputy Director for Advocacy and Government Relations, said:

“With this announcement the Trump administration will re-open the floodgates for arms sales with weakened human rights criteria, which could potentially fuel brutal conflicts, and make everyone less safe.

“The ATT is the first global instrument to set international standards for the transfer of conventional arms and ammunition with the express purpose of reducing human suffering.

“The treaty requires governments to assess the risk of violations of international human rights and humanitarian law before they authorise an arms deal, in order to prevent weapons from being irresponsibly used in brutal conflicts, by organised crime or funnelled to terrorists.

“The treaty in no way interferes with the Second Amendment of the US Constitution, which guarantees US’ citizens the right to bear arms.

“As the biggest arms exporter, the US signature to the ATT was an important step towards ensuring that dangerous weapons stay out of the wrong hands.”