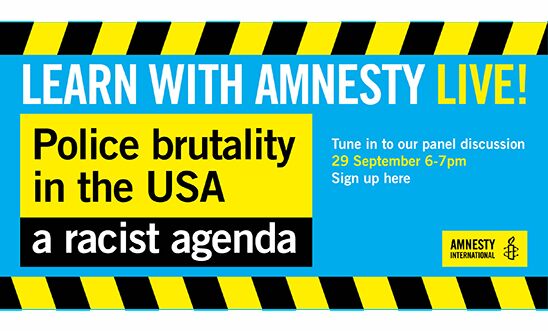 Amnesty International will hold an online panel discussion on police brutality in the USA and the urgent need for police reform later this month.

The event - on Tuesday 29 September, 6-7pm (UK time) - will allow UK activists to hear from policing experts from Amnesty USA at a time when the Black Lives Matter movement has sparked a major debate on racism within policing and in wider society on both sides of the Atlantic.

Against the backdrop of continuing protests in the USA following the death of George Floyd at the hands of white police officers in Minneapolis in May, the event will explore the disturbing levels of police violence against members of the US public, especially people of colour.

Alongside human rights activists and Black Lives Matter movements, Amnesty has been campaigning for reforms in US policing, for changes to gun laws, and for accountability and justice for the victims of police brutality.

In June, Amnesty research showed that US police forces committed widespread human rights violations against Black Lives Matter protesters, with 125 separate examples of police violence against protesters in 40 states and the District of Columbia between 26 May and 5 June alone.

This is a free event, though you must register here.