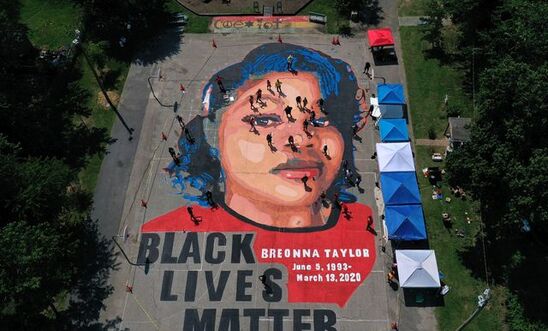 Authorities need to allow peaceful protests over the killing

‘This case must serve as a wake-up call’ - Kristina Roth

Responding to an announcement that a grand jury in the US state of Kentucky has charged one police officer with “wanton endangerment” during a raid which resulted in the fatal shooting of Breonna Taylor at her home in March, Kristina Roth, Senior Program Officer for Criminal Justice at Amnesty International USA, said:

“Breonna Taylor’s case reminds us of how Kentucky’s police use of lethal force statute puts accountability out of reach for unlawful killings by police - and how police, who are supposed to protect life, so frequently only see one side of that principle.

“This case must serve as a wake-up call to our elected officials that they must meet this moment with a bold agenda for police reform - one that brings about meaningful accountability, reimagines public safety and provides justice for all.

“Breonna Taylor’s death is a tragedy. She was asleep in her bed when the police busted down her door and recklessly opened fire, taking her life. Black people in America have the same right to be safe as all people, though this is hard to conceive when we think of the abhorrent killings of Breonna, Ahmaud Arbery, George Floyd, Dijon Kizzee and too many more.

“We call on police to facilitate the right to peaceful protest in the wake of this news. Everyone has the right to take to the streets and make their voices heard, and police must meet their obligation under international law to enable that right.”

In July, Amnesty International USA wrote to Kentucky attorney general Daniel Cameron regarding Breonna Taylor’s killing, raising a number of serious concerns - including the use of a “no-knock” search warrant late at night and the fact that police officers were apparently not wearing body cameras.