USA: Banned Trump hair adverts to be driven round Washington 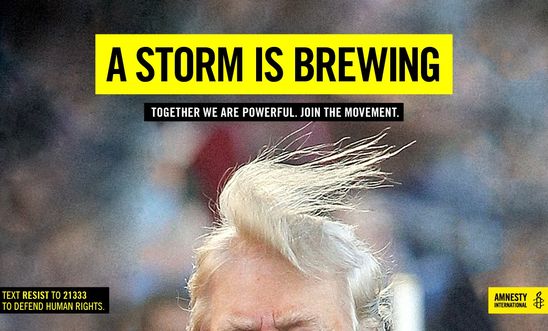 One of the banned adverts

An advertising campaign from Amnesty International USA that was rejected by the Washington Metropolitan Area Transit Authority (WMATA) will be displayed across the city today and tomorrow (26-27 February), calling on people to join the global human rights organisation.

The series of adverts, which depict the wind-blown hair of US President Donald Trump, Russian President Vladimir Putin, and North Korean leader Kim Jong-un, warn that “a storm is brewing” and were originally intended to run for two weeks to coincide with the launch of Amnesty’s Annual Report on the State of Human Rights, published last Thursday.

The campaign was rejected by the WMATA on the grounds that they violate its guidelines against issue-oriented advertising citing two provisions of their policy one of which said: “Advertisements intended to influence members of the public regarding an issue on which there are varying opinions are prohibited.”  The other stated: “Advertisements that are intended to influence public policy are prohibited.”

Amnesty strongly refutes the contention that the adverts are political, given that they focus on human rights, a matter of international law.

The ads will now be displayed on a truck with LED video panels as it drives through Washington DC stopping at landmarks on Monday and Tuesday of this week. The advertising truck campaign coincides with Amnesty’s ‘lobby day’, when more than 300 of the group’s activists will meet with their members of Congress on Capitol Hill to discuss crucial human rights issues, including refugee protection, gun violence and women’s rights.

“It’s deeply unfortunate that advocacy ads are so notoriously hard to place in our nation’s capital — exactly the market where they’re needed the most.  We’re very disappointed with WMATA’s decision, but are determined to get our message out to defend human rights both here at home and around the world.

“We want to send a message to Washington – there’s a storm brewing and we’re ready to stand strong for human rights.

“Our world leaders, including President Trump, need to know that when human rights are denied, Amnesty International and our supporters won’t be silent. We will continue to fight injustice around the world and here at home.

“The message of our ads is a simple one asking people to join us in upholding human rights, which is not and should not be a political or partisan issue. World leaders are accountable to their citizens and should respect their basic human rights. It should not be controversial to point out that this is their job.”