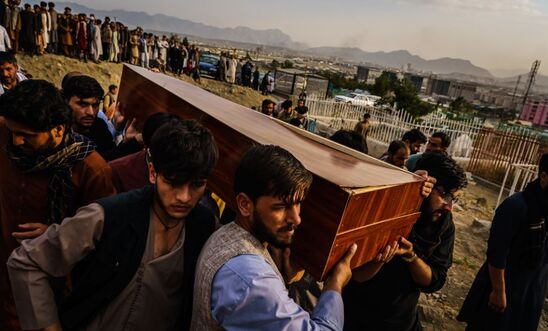 Coffins of those killed being carried at the funeral the following day © Marcus Yam, Los Angeles Times, 2021

‘Many similar strikes in Syria, Iraq and Somalia have happened out of the spotlight’ - Brian Castner

“This admission is an important step towards accountability for the killings in Kabul, but much more remains to be done.

“The US must now commit to a full, transparent and impartial investigation into this incident.

“Anyone suspected of criminal responsibility should be prosecuted in a fair trial.

“Survivors and families of the victims should be kept informed of the progress of the investigation and be given full reparation.

“It should be noted that the US military was only forced to admit to its failure in this strike because of the current global scrutiny on Afghanistan.

“Many similar strikes in Syria, Iraq and Somalia have happened out of the spotlight, and the US continues to deny responsibility while devastated families suffer in silence.

“The US must ensure that it ends unlawful strikes, consistently and thoroughly investigates all allegations of civilians harmed in attacks, and publicly discloses its findings.”

On 29 August, a drone strike by the US military killed ten civilians - including seven children - in a residential neighborhood in Kabul in Afghanistan. In the immediate aftermath of the attack, the Pentagon press secretary John Kirby said the USA was “not in a position to dispute” reports of civilian deaths while claiming that “no military on the face of the Earth works harder to avoid civilian casualties than the United States’ military”.

Amnesty is calling for full reparations for the relatives of those killed in the strike, as well as remedy for decades of civilian casualties as a result of US military operations - including compensation, restitution and rehabilitation.