USA: Abortion ruling is a 'grim milestone' in country's history 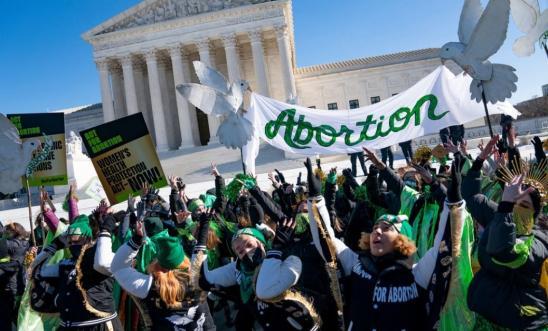 Warning that birth control, marriage equality and other gender rights could now be threatened

“Today’s overturning of Roe v Wade marks a grim milestone in the history of the United States.

“Millions of people now face a future where they will not be able to make deeply personal choices that affect their bodies, their future and the wellbeing of their families.

“People will be forced to give birth. They’ll be forced to seek unsafe abortions. This is the outcome of a decades-long campaign to control people’s bodies.

“For those people in America watching this moment with the same sense of horror and pain that we feel, we say: you’re not alone. You’re one of the vast majority of Americans who disagree with today’s decision.”

Amnesty’s campaigning for abortion rights continues in the UK. People in Northern Ireland are still without fully-commissioned and accessible abortion services despite historic reform which decriminalised abortion in 2019.

On Tuesday (21 June), the UK government published new abortion statistics for England and Wales showing that 161 women from Northern Ireland travelled to access abortion services last year, figures which Amnesty called a “reminder of the urgent need for commissioned services” in Northern Ireland.

“The overturning of Roe v Wade is a devastating blow to women’s rights.

“This rights rollback is a painful reminder of the fragility of progress and why the fight to protect access to abortion healthcare never stops. We offer our full support and solidarity to campaigners in the US who will continue their work to enable access to abortion in light of this shameful decision.

“We are at a vital point in the realisation of abortion rights in Northern Ireland - the sooner services are established and accessible to all who need them the better.”