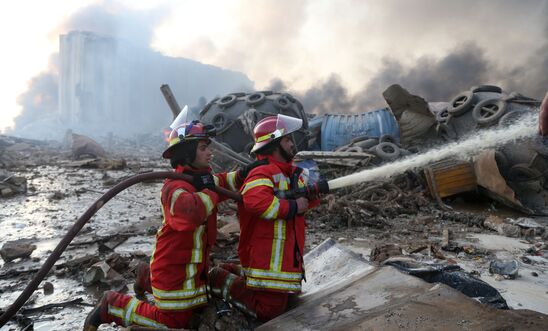 The Fire Brigades Union (FBU) has joined Amnesty International in calling on the UK Government to press for a full international investigation into the devastating explosion in Beirut three months ago.

In a new one-minute video, UK firefighter Holly Ferguson, 36, who has been in the fire service for 11 years, says the Beirut explosion was “the stuff of nightmares”.

Ferguson says the Lebanese firefighters were “badly let down” by officials who knew that dangerous chemicals were stored at the port but failed to pass this information on.

The ten emergency workers were called out by police to respond to a serious fire at the Beirut Dock at 5.55pm. They were not made aware of the large quantities of ammonium nitrate stored at the port, despite several senior Lebanese officials knowing of its existence. At 6.08pm, the warehouse storing the chemicals exploded, killing the nine firefighters and the paramedic, with 190 people in the city killed in all.

More than 6,500 people were injured by the explosion, while 300,000 people were left homeless or displaced from their homes. It also led to an estimated 70,000 workers losing their jobs.

Three months on from the explosion, Amnesty and the FBU believe it is increasingly clear that the current Lebanese authorities have no intention of conducting an effective, transparent and impartial investigation into the explosion - denying victims their right to truth, justice and remedy, including the families of the firefighters who died doing their jobs at the port.

Victims of the blast - including relatives of the firefighters killed - have been vocal in calling for an international fact-finding mechanism, expressing their lack of faith in domestic processes. These calls have so far been rejected by the Lebanese authorities, including by the president.

The FBU and Amnesty are now urging UK Foreign Secretary Dominic Raab to support calls for a credible, international investigation. The investigation should be mandated to assess all aspects of responsibility for the explosion, said Amnesty and the FBU, making its findings public.

“The devastating scenes in Beirut will live long in the memory and the thoughts of firefighters in the UK.

“Each day, firefighters across the world are first on the scene responding to fires and other incidents in the knowledge that they may never return.

“Tragically, the brave men and women responding to the fire at the port in Beirut did so without being told that 3,000 tonnes of ammonium nitrate were present on the site - they were led to their deaths and unforgivably let down.

“The families of the firefighters and all those who died in Beirut deserve answers.”

“Lebanon has a long and wretched history of its politicians allowing serious crimes - including serious human rights violations - to go unpunished, and that’s precisely what appears to be happening all over again.

“The UK should make it crystal clear to the Lebanese authorities that it’s time to break with the past and hold those responsible for the devastation of 4 August to account.”

Year of protests and political unrest

In October 2019, a series of unprecedented protests erupted in in Lebanon over corruption and poor living standards. For weeks, tens of thousands of protesters assembled in cities, towns and villages across the country. The military and security forces responded to the largely peaceful protests with beatings, teargas, rubber bullets, and at times live ammunition and pellets. The security forces also failed to protect protesters from attacks by armed supporters of political parties. Hundreds of protesters were seriously wounded, while dozens were arrested and unlawfully detained. In detention, many reported being subjected to severe beatings, sometimes amounting to torture. Activists and journalists have been prosecuted, including before military courts.