UK/Iran: Olivia Colman and others join campaign for detained Briton 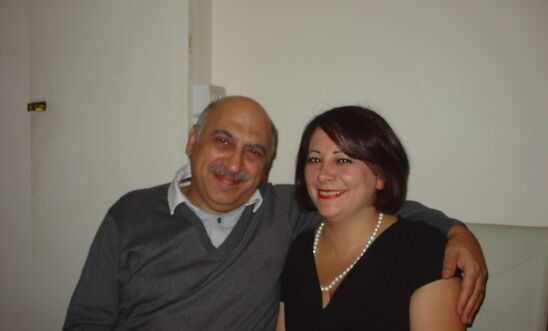 Like Nazanin Zaghari-Ratcliffe, Anoosheh Ashoori is an arbitrarily-detained UK-Iranian dual-national

‘How much longer do we have to wait and helplessly watch an innocent, family-loving man suffer?’ - wife, Sherry Izadi

Anoosheh Ashoori, a UK-Iranian dual-national retired engineer who turns 67 today, has been arbitrarily detained - mostly in inhumane conditions - in Iran for more than three-and-a-half years.

Last weekend, Sky News reported how in a phone recording recently smuggled out of jail, Anoosheh had expressed his anguish at the extended separation from his family, with Sherry Izadi, his wife of more than 30 years, saying she could “hear tears in his voice” and “sense the desperation in him”.

Ashoori, a father of two, was arrested by Iranian Military Intelligence officials in August 2017 while visiting his elderly mother, and subjected to a grossly unfair trial that saw torture-tainted “confessions” used to convict him of “cooperating with a hostile state”. He was jailed for ten years, with two years to run concurrently.

The former engineer from London is suffering from failing health and is at risk of contracting coronavirus in crowded and unsanitary jail conditions. With fears mounting over his health and well-being, Amnesty has launched a new Free Anoosheh campaign calling on the UK government to urgently press the Iranian authorities to ensure that the 67-year-old is permanently released from jail and allowed to leave the country to rejoin his family in the UK.

Ashoori’s adult children - Elika and Aryan - have been active in the family campaign, which Amnesty is supporting. Amnesty is calling on the UK to extend “diplomatic protection” to Ashoori, which means his case becomes the subject of an official dispute between the UK and Iran.

Olivia Colman, Nazanin Boniadi and Shappi Khorsandi have all previously been active campaigning for the release of Nazanin Zaghari-Ratcliffe, who like Ashoori has been arbitrarily detained in Iran for a long period after being arrested while on a family visit to the country.

Olivia Colman, who is an Amnesty Ambassador, said:

“It’s hard to imagine what must be going through Anoosheh’s mind as he sits there day after day in Evin Prison - it must be utterly soul-destroying.

“On his birthday, I’m thinking of his family in London and the ordeal they’re going through. It’s really important that we get people talking about Anoosheh’s plight and the urgent need for more action from the Government on his behalf.”

Nazanin Boniadi, who is also an Amnesty Ambassador, said:

“I’ve followed Anoosheh’s case with mounting concern and it’s heart-breaking to see the Iranian authorities so cruelly toying with his life like this.

“I’m supporting this campaign to get Anoosheh out of jail and back home to his family because I’m honestly outraged that the Islamic Republic continues to use dual and foreign nationals as political pawns.”

“The way the Iranian authorities have been preying on dual-nationals has been really upsetting to see.

“Anyone with family or other connections to Iran is now going to feel incredibly nervous about going back.

“Iran needs to bring this cynical policy to an immediate end and try to restore international trust. It could start by releasing Anoosheh and letting him come back to his family in Britain.”

“Birthdays are always a painful and poignant reminder that our family has been incomplete for almost four years, and it’s even worse when Anoosheh’s birthday comes around.

“Had he been here, Elika would have made him a phenomenal cake - most probably something science-themed - and he would be taking hundreds of pictures as was his habit.

“There would be mountains of food, champagne toasts, the blowing of candles, and lots of presents.

“How much longer do we have to wait and helplessly watch an innocent, family-loving man suffer at the hands of a government that is using him as a bargaining chip?

“Ordinary citizens should not suffer because of quarrels between governments. We need the UK government to take action now.

“We are tired of empty talk that has amounted to nothing. We are tired of spending yet another birthday, separated from our loved one. We look to you, our kind supporters, to help us put pressure on the UK government and reunite our family.”

“Anoosheh’s predicament is extremely serious. We need the UK government to really crank up their work on behalf of Anoosheh.

“UK officials need to reassure the family that they’re working non-stop to ensure that Anoosheh is permanently released and that his safe passage back to the UK is in sight.

“As we’ve seen with the case of Nazanin Zaghari-Ratcliffe, the UK hasn’t done as much as it should have done on behalf of its nationals who are being mistreated in Iran. It's time that this distressing pattern was reversed.”

There are longstanding concerns that the UK government has failed to properly prioritise the cases of Ashoori, Zaghari-Ratcliffe and other British nationals held in Iran. As with the case of Zaghari-Ratcliffe, when Ashoori was arrested his family in the UK were initially told by UK government officials to remain quiet about his situation.

Ashoori’s treatment at the hands of the Iranian authorities may be part of a wider pattern by the Iranian authorities of using imprisoned UK nationals in Iran to exert diplomatic leverage, as previously stated by the UN Special Rapporteur on the situation of human rights in Iran, a tactic which the UK foreign secretary has recently condemned.