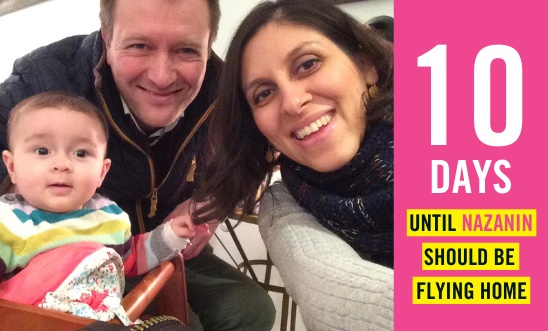 After five years in detention, the UK national is due for release on 7 March

‘We’re within days of the finishing line’ - Kate Allen

Amnesty International has joined the family of Nazanin Zaghari-Ratcliffe in a “countdown to reunion” as the end of the UK national’s five-year prison sentence following an unfair trial in Iran approaches.

Zaghari-Ratcliffe, 42, a UK-Iranian dual national who is currently out of jail but confined to her parents’ home and its immediate surrounds in Tehran, is due for release on Sunday 7 March.

Her husband Richard Ratcliffe has launched the countdown to freedom today alongside Amnesty UK and its supporters who are joining the countdown on social media.

Using the hashtag #FreeNazanin, supporters of Zaghari-Ratcliffe will be posting photographs and solidarity messages relating to the case on a daily basis ahead of 7 March.

Today, Amnesty has posted the Twitter message “In 10 DAYS Nazanin Zaghari-Ratcliffe should be flying home”, with an invitation to its followers to “RT our daily countdown & help us call on UK government & Iranian authorities to reunite Nazanin with her daughter & husband at the end of her sentence”. This appears alongside a photograph of Zaghari-Ratcliffe, her husband and their young daughter Gabriella.

Zaghari-Ratcliffe was arrested at Imam Khomeini airport in Tehran on 3 April 2016 prior to returning to the UK after a family holiday. She was held for more than eight months in solitary confinement, during which time she was subjected to a grossly unfair trial on trumped-up national security-related charges and sentenced to five years in jail. In 2017, a second court case was opened against her and later postponed. Last year, she was released on “furlough” from Tehran’s Evin Prison in the context of wider prisoner releases amid coronavirus fears. She has since been made to wear a security device limiting her to within 300 metres of her parents’ home in the capital.

“We’ve always said Nazanin should never have been jailed in the first place, but the important thing now is that she’s released very soon and is immediately able to be reunited with her husband and daughter in the UK.

“This daily countdown to reunion will hopefully help bolster Nazanin’s spirits, as she sees the amazing level of support she has.

“Nazanin has suffered a lot during this lengthy ordeal, but we’re within days of the finishing line.

“The Iranian authorities should now confirm as soon as possible that preparations are actually underway to facilitate Nazanin’s release, with confirmation that she’ll be free to travel back home to her family in London.”

“The past weeks have felt increasingly uncertain for Nazanin and me, as the day draws close and the silence remains. Is she going to be finally let go? Or is there going to be a new game?

“The Government still promises they are working on it. We still hope they deliver. But we are also beginning to discuss with them urgently - if she’s not, what happens next?

“In the middle of this unease and uncertainty, having the messages of home and care from people around the country has been a great source of solace to Nazanin. Thank you to all those - Amnesty supporters and others - who have kept her in the light.”

There are longstanding concerns that the UK government has failed to properly prioritise the cases of Zaghari-Ratcliffe and other dual-nationals held in Iran. At the time of Zaghari-Ratcliffe’s original arrest, her family were advised by UK officials to remain quiet about her detention. More recently, Richard Ratcliffe was told by UK officials that he should stop talking publicly about his wife’s anticipated release date.

Zaghari-Ratcliffe treatment at the hands of the Iranian authorities appears to be part of a wider pattern of bringing spurious national security-related charges against dual-nationals and others with foreign connections to exert diplomatic leverage. Prominent past cases have included the American-Iranian journalist Jason Rezaian and the Canadian-Iranian academic Dr Homa Hoodfar, while the Austrian-Iranian mechanical engineer Massud Mossaheb and the Swedish-Iranian medical academic Ahmadreza Djalali are among those currently being held in Iran. Amnesty has recently highlighted the case of UK-Iranian dual-national Mehran Raoof, a 64-year-old trade union activist arbitrarily detained in Iran since October and held in prolonged solitary confinement.