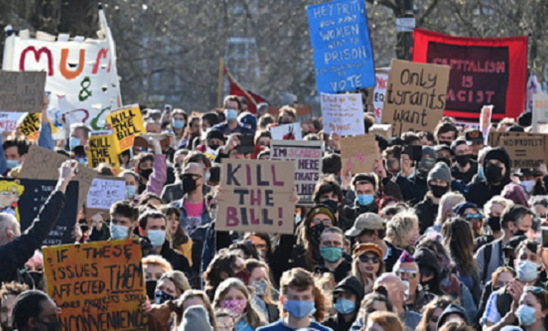 The Police, Crime, Sentencing and Courts Bill is being debated in the House of Commons tomorrow

Amnesty International is urging MPs to oppose the controversial Police, Crime, Sentencing and Courts Bill in the House of Commons tomorrow (Monday 5 July), warning that the proposed legislation will severely curtail basic rights, and entrench racism and discrimination.

In its current form, the bill represents an enormous and unprecedented extension of policing powers which would effectively give both police and Government ministers the power to ban, limit or impose undue restrictions on peaceful protests on the grounds that they might be ‘noisy’ or cause ‘annoyance’. It also extends police powers already used disproportionately against Black people, and severely restricts the right to roam.

“Rattled by democratic protests, ministers have drawn up sweeping new policing powers which you’d fully expect to see in the pages of a novel about a future dystopian Britain.

“The right to protest is fundamental to a free and fair society, and it shouldn’t be down to a government minister to decide which protests are permitted.

“This bill is highly likely to further entrench racism and discrimination in British policing. These sweeping new police powers are likely to be disproportionately deployed against black people who are already much more likely to be stopped and searched, to be Tasered, or even to die in police custody.

“The Policing Bill is a calculated attack on our bedrock basic rights, and if passed would diminish the UK’s standing in the world.”

The debate, including consideration of a number of amendments, is expected to begin at approximately 3.30pm.