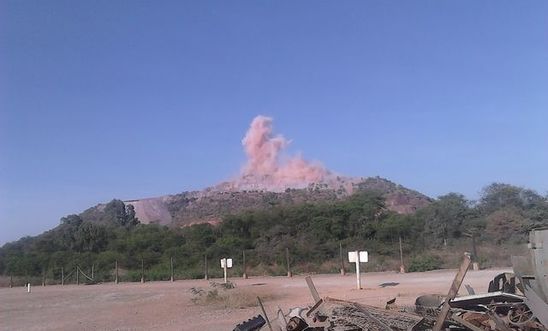 Blasting operations at the S&K mine, December 2013. © Private

The UK Government must investigate the British-Australian mining company Rio Tinto over a possible breach of EU economic sanctions on Burma, Amnesty International said ahead of the company’s annual shareholder meeting in London today (16 April).

Rio Tinto was instrumental in the setting up of the secretive Monywa Trust which enabled Canadian-based Ivanhoe Mines (now Turquoise Hill Resources) to divest its stake in the controversial Monywa copper mine project in central Burma, where abuses have included forced evictions and extreme pollution.  Rio Tinto has been a major shareholder of Ivanhoe since 2006 and took a controlling stake in the company in 2012.

The Trust was established in 2007 as a condition for Rio Tinto’s investment in Ivanhoe.

Information obtained by Amnesty International suggests that the Trust’s subsequent sale of Ivanhoe’s stake could have involved a breach of economic sanctions on Myanmar, by making assets available to the military-owned conglomerate the Union of Myanmar Economic Holding (UMEHL) and Tay Za, a ‘broker’ for the Myanmar government.

At the time the Trust sold Ivanhoe’s stake in the Monywa Project in 2011, Rio Tinto owned 46.5% of Ivanhoe’s shares and appointed half of its Directors. An employee of Rio Tinto also sat on the board of the protector company for the Monywa Trust between 2012 and 2013.

“Rio Tinto’s role in the creation of this trust raises serious questions about whether the company was involved in activities which may have had the effect of circumventing EU economic sanctions, a criminal offence under UK law.

“Rio Tinto has a responsibility to its shareholders. As they meet in London today, the shareholders should demand that Rio Tinto disclose full details of all transactions related to the Trust and the divestment of Ivanhoe’s interest in the Monywa project.

“If as Rio Tinto claims there was no breach of sanctions, then what does the company have to hide?”

In a letter to Amnesty, Rio Tinto states that “it was, and remains, our understanding that the measures required by Rio Tinto and put in place by Ivanhoe on the disposal of the Myanmar asset were fully compliant with all applicable laws giving effect to sanctions”.

Since its inception, and throughout various changes in ownership, the Monywa project – which includes the notorious Letpadaung mine – has been characterised by serious human rights abuses and a lack of transparency.

In February 2015, Amnesty International released a ground-breaking report exposing how companies linked to the Monywa project have profited from serious human rights violations and illegal activity committed by the Burmese authorities, including large-scale forced evictions.

The report also documents how community protests about the Letpadaung mine have, on multiple occasions, been met with excessive use of force by the police. In November 2012, security forces used white phosphorous, a highly toxic explosive substance, in a deliberate attack on villagers and monks who were protesting about the mine.

The Monywa project was taken over by UMEHL and Chinese company Wanbao Mining in 2010-2011. In August 2011, Ivanhoe Mines announced that the Trust had sold its stake in the project. But, it remains unclear who the Trust sold the project to and how it ended up in the hands of its current owners.

Ivanhoe Mines set up the Trust in the British Virgin Islands – a territory of the United Kingdom – and used secrecy provisions to keep details of the sale secret. Rio Tinto, as current majority shareholder of Ivanhoe Mines (now Turquoise Hill Resources), has never responded to calls to make this information public.