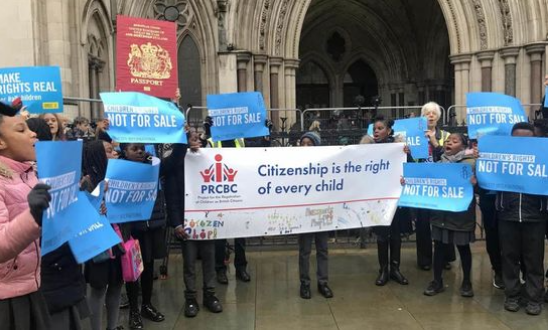 Home Office will stop profiting from those who cannot afford the child citizenship fees of £1,012

‘Whilst years of harm cannot be undone, today’s announcement is an important step’ - Solange Valdez-Symonds

The UK government has today announced they will waive the £1,012 child citizenship fee for children whose parents and guardians cannot afford to meet the fee; and a total exemption of the fee for all children looked after by a local authority.

This follows a long-running legal battle and campaign led by the Project for the Registration of Children as British Citizens (PRCBC), which was supported by Amnesty International UK.

Today’s announcement is to give effect to the decisions of the High Court in December 2019 and Court of Appeal in February 2021 that the Government had failed to consider the best interests of children.

Currently, the administrative processing cost is £416 per application, meaning a profit of £596 is made by the Home Office to cross-subsidise the immigration system.

Today’s announcement will still mean some children being overcharged for British citizenship which is their right under British nationality law. However, the new policy – if implemented effectively – will remove a significant barrier to thousands of children who were born and are growing up in the UK claiming their citizenship rights.

“For years the Home Office has been raking in millions of pounds, shamelessly profiting on children’s rights.

“As confirmed by the courts, these fees have prevented thousands of children from claiming their citizenship, leaving them feeling excluded and isolated.

“Whilst years of harm cannot be undone, today’s announcement is an important step towards ensuring children no longer suffer this devastating alienation.”

“Amnesty and PRCBC have campaigned for years to remove this financial barrier to children exercising their citizenship rights.

“While there remains much to do, we welcome today’s development which is long overdue recognition from the Government of its duty to ensure that all children can access their citizenship rights.”