UK: Fresh call on the Government to help British national on hunger strike in Egypt 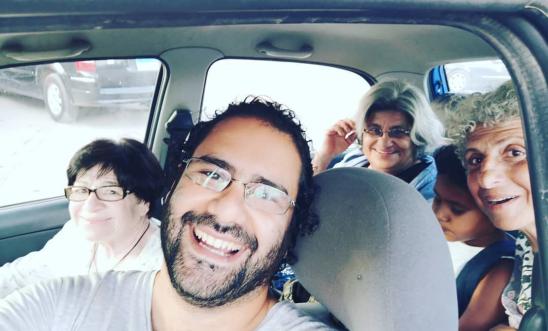 Human rights activist, Alaa Abdel Fattah who rose to prominence during 2011 anti-Mubarak protests, believed to be in serious condition

‘Time is running out to save Alaa’s life’ - Sacha Deshmukh

Amnesty International is calling on the UK government to urgently demand access to a British national who is on hunger strike in jail in Egypt and is believed to be in a serious - and potentially-life-threatening - condition.

The writer and activist, 40, is reportedly only drinking water with salts during an open-ended hunger strike that he is holding in order to secure a visit from UK consular officials and get a transfer out of maximum security prison. He has been denied a mattress and is instead sleeping on rough blankets on a concrete bed. He is prevented from receiving books, newspapers, and any other reading material, including access to the prison library - adding to fears for his well-being. He is being kept in his cell for 24 hours a day with two other cell mates, preventing him from exercising in the prison yard and from getting sunlight and fresh air.

In December, an Emergency State Security Court sentenced Abdel Fattah to five years in jail on charges of “spreading false news” in relation to social media posts about torture and deaths in custody in Egyptian prisons. Along with co-defendants, Mohamed Baker and Mohamed Ibrahim "Oxygen", Abdel Fattah had already spent more than two and a half years in arbitrary pre-trial detention in a separate case. Amnesty strongly believes that all three were charged solely in relation to their human rights activism and for peacefully expressing their views.

Abdel Fattah rose to prominence in Egypt during nationwide protests in 2011 against Hosni Mubarak’s authoritarian government and has been targeted by the authorities for most of the past decade. Among other things, the activist suffered torture soon after his detention in Tora Maximum Security Two jail in 2019.

Abdel Fattah is from a well-known Egyptian family which includes several human rights activists. His mother - Laila Soueif, a mathematics professor at Cairo University - was born in London and the family have significant ties to the UK.

“They have done everything to drive Alaa to take his own life, instead he’s decided to fight back with the only thing he has left: his body.”

In Abdel Fattah’s most recent letter to his family, he wrote:

“I am better just knowing we are resisting and fighting back.”

“Time is running out to save Alaa’s life - we need urgent intervention from the UK government.

“The Government needs to insist on UK consular officials being able to visit Alaa in Tora prison at the earliest opportunity. They will need to assess his condition and ensure that he is not being punished in any way for his hunger strike.

“The bigger picture is that the UK should be demanding that the Egyptian authorities unconditionally release Alaa from prison, while expressing very serious concern that he was unfairly jailed in the first place.”