UK among highest COVID-19 health worker deaths in the world 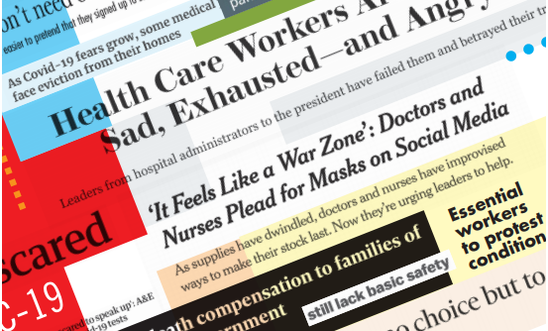 More than 540 health and social worker deaths in England and Wales, from 3,000 global fatalities

Health workers in Pakistan, Mexico and the Philippines attacked - others detained or dismissed for speaking out

The UK has recorded the among the highest number of COVID-19 health worker deaths in the world, according to a new report by Amnesty International.

The 61-page report - Exposed, Silenced, Attacked: Failures to protect health and essential workers during the pandemic - shows that, with at least 540 health and social workers having died from COVID-19 in England and Wales alone, the UK is second only to Russia, which has recorded 545 health worker deaths.

Amnesty has collated and analysed a wide range of available data showing that more than 3,000 health workers have died after contracting COVID-19 in 79 countries, though the figure is likely to be a significant underestimate due to under-reporting. According to Amnesty’s monitoring, the countries with the highest numbers of health worker deaths thus far, are: Russia (545), UK (England and Wales: 540, including 262 social care workers), USA (507), Brazil (351), Mexico (248), Italy (188), Egypt (111), Iran (91), Ecuador (82) and Spain (63).

In the UK, early studies indicate that Black, Asian and minority ethnic health workers appear to be significantly over-represented in the total number of COVID-19 related health worker deaths, with some reports showing that more than 60% of health workers who died identified as BAME.

Health workers have reported serious shortages of personal protective equipment in nearly all of the 63 countries and territories surveyed by Amnesty. In the UK, a survey of more than 16,000 doctors by the British Medical Association found that 48% of the respondents reported buying PPE for their own use or using donated PPE due to a lack of supplies at their workplaces. The survey also found that 65% of doctors said they felt either “partly or not at all protected”.

Healthcare professionals across the UK were also warned not to talk about shortages in protective equipment. Almost half of healthcare workers questioned as part of a major survey by the Doctors Association UK said they had effectively been gagged and prevented from raising concerns.

Amnesty believes the UK Government’s approach to this crisis must be properly investigated through an urgent public inquiry, to ensure lessons are learned and that there is proper accountability.

“It is tragic that we’ve seen so many of our dedicated health and social care workers in England and Wales die from COVID-19.

“We have to understand whether these deaths were avoidable, and what led to this terrible outcome.

“There appears to have been a catastrophic failure to provide proper PPE and a failure to grapple with the alarmingly high death rates among BAME health workers.

“This crisis is far from over and an independent inquiry into the Government’s handling of the coronavirus pandemic is urgently needed.

“We must learn lessons from this current crisis if we want to prevent future unnecessary deaths.”

Amnesty’s report documents how health workers around the world who have raised safety concerns in the context of COVID-19 have faced retaliation - ranging from arrest and detention, to threats and dismissal.

In the USA, nursing assistant Tainika Somerville was fired after posting a video on Facebook where she read out a petition calling for more PPE. Somerville says staff at the nursing home in Illinois where she worked were not informed that they were working with COVID-19 patients and only found out through media reports.

In Russia, Amnesty has highlighted the cases of two doctors - Yulia Volkova and Tatyana Reva - who are facing retaliation after complaining about a lack of PPE. Volkova has been charged under Russia’s “fake news” laws, while Reva is facing disciplinary proceedings that may result in her dismissal.

In Egypt, Amnesty has documented the cases of nine healthcare workers who were arbitrarily detained between March and June on vague and overly-broad charges of “spreading false news” and “terrorism”. All those detained had expressed safety concerns or criticised the Government’s handling of the pandemic.

Amnesty has also documented several cases where health and essential workers experienced violence because of their jobs. For example, a nurse in Mexico was reportedly drenched with chlorine while walking on the street, and in the Philippines attackers threw bleach in the face of a hospital utility worker. In Pakistan, Amnesty recorded several instances of violence against health workers since April. Hospitals have been vandalised, doctors have been attacked, and one was shot by a member of the Counter Terrorism Force.

In addition to unsafe working conditions, Amnesty has documented how some health and essential workers have been denied pay.  In South Sudan for example, doctors on the Government’s payroll have not received their salaries since February and do not receive welfare packages or medical cover. In Guatemala, at least 46 facilities staff were not paid for the two-and-a-half months they spent working at a COVID-19 hospital.

“It is especially disturbing to see that some governments are punishing workers who voice their concerns about working conditions that may threaten their lives. Health workers on the frontline are the first to know if government policy is not working, and authorities who silence them cannot seriously claim to be prioritising public health

“We call on all states affected by COVID-19 to carry out independent public reviews into their preparedness for and responses to the pandemic, with a view to better protecting human rights and lives in the event of a future mass disease outbreak.”