Turkey: 'World is watching' as women stand up to Erdogan's withdrawal from the Istanbul Convention 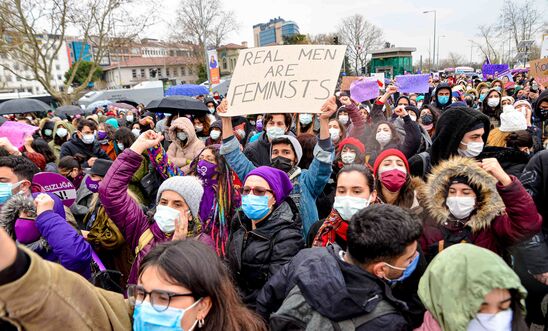 The Istanbul Convention sets minimum standards on prevention of violence, protection and support for women and girls at risk, and the criminal prosecution of perpetrators

Ahead of nationwide protests this weekend against President Erdogan's decision to pull out of the Istanbul Convention to combat violence against women and domestic violence, Nils Muižnieks, Europe Director at Amnesty International, said:

“The withdrawal of the Istanbul Convention violates the rights of millions of women and girls in Turkey, and it flies in the face of any so-called commitment by the government to protect survivors of sexual assault and domestic violence.

“We will be joining women this weekend across Turkey and around the world to stand up and take action to reverse the grave threat to their safety and demand their human rights.

“The Istanbul Convention is more important now than ever with COVID-19 measures, such as lockdown, leading to a spike in reports of violence against women and girls.

“Women face similar human rights abuses all around the world and that is why international solidarity is so important - the world is watching.

“We are strongly urging the Turkish authorities to reverse their dangerous decision to withdraw from a treaty designed to end violence against women.”