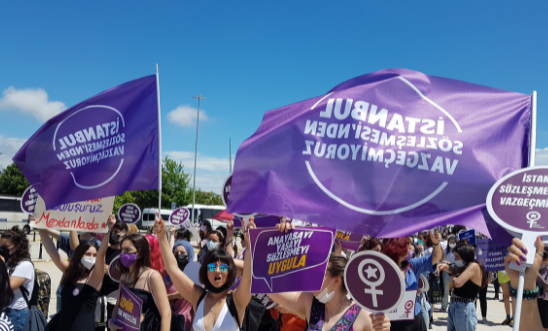 The convention provides a legal framework to protect women from violence and promote gender equality, and Turkey’s withdrawal has sparked global condemnation and nationwide protests in a country where domestic violence is highly prevalent - at least 300 women were murdered last year.

Established in Istanbul in May 2011 when the document was opened to signatures by the Council of Europe, the treaty has been widely supported - with 34 out of 47 Council of Europe countries having ratified (signing and formally ratifying). Last week, Ukraine and the UK announced their strong commitment to ratifying the treaty, while Mexico - which has “observer state status” in the Council of Europe - has also expressed its intention to be part of the convention. Azerbaijan and Russia are the only Council of Europe member states not to have yet signed the treaty.

With today’s unprecedented departure, Turkey is the now the first and only country in the Council of Europe to have ever withdrawn from an international human rights convention.

The Istanbul Convention has led to significant improvements in how states treat those who experience gender-based violence. These include the establishment of 24-hour helplines for survivors of domestic violence in Finland, and the introduction of consent-based definitions of rape in Iceland, Sweden, Greece, Croatia, Malta, Denmark and Slovenia.

“Turkey has set the clock back ten years on women’s rights.

“The withdrawal has set a terrifying precedent and sends a reckless and dangerous message to perpetrators who abuse, maim and kill that they can carry on doing so with impunity.

“This deplorable decision has already become a rallying point for women’s rights and LGBTI+ activists all over the world.

“We will continue the fight to uphold the human rights of all those impacted by the scourge of gender-based violence.”

Turkey’s withdrawal from the Istanbul Convention is an extremely worrying development amid an ongoing erosion of human rights in the country.

Last weekend, hundreds of participants in a Pride march in Istanbul had tear gas and plastic bullets used against them by security forces. At least 47 people were detained, including two children. One police officer knelt on the neck of an AFP journalist as he was being restrained, severely restricting his ability to breathe - conduct that could amount to torture or other ill-treatment.

The Turkish government and its supporters have said the Istanbul Convention threatens “family values” and “normalises homosexuality”, claims which have been echoed by several governments, including Poland and Hungary, to justify their attempts to roll back LGBTI+ rights.