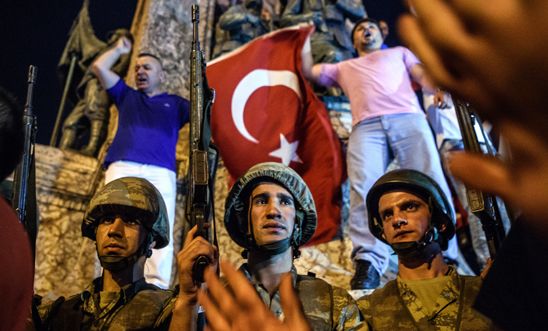 Turkish solders at Taksim square as protesters take to the streets of Istanbul during the attempted military coup, 16 July 2016 © AFP/Getty Images

Human rights in Turkey are in peril following a bloody coup attempt on Friday 15 July, which resulted in the deaths of at least 208 people and almost 8,000 arrests, Amnesty International said today.

Several government officials have suggested reinstating the death penalty as punishment for those found responsible for the failed coup, and Amnesty is now investigating reports that detainees in Ankara and Istanbul have been subjected to a series of abuses, including ill-treatment in custody and being denied access to lawyers.

“The sheer number of arrests and suspensions since Friday is alarming and we are monitoring the situation very closely. The coup attempt unleashed appalling violence and those responsible for unlawful killings and other human rights abuses must be brought to justice, but cracking down on dissent and threatening to bring back the death penalty are not justice.

“We urge the Turkish authorities to show restraint and respect for the rule of law as they carry out the necessary investigations, granting fair trials to all those in detention and releasing anyone for whom they do not have concrete evidence of participating in criminal acts. A backslide on human rights is the last thing Turkey needs.”

Although exact figures are unclear, Turkish authorities report that 208 people were killed and more than 1,400 injured across Istanbul and Ankara on Friday night when a faction of the military attempted to seize power, raiding TV stations and firing on the parliament and presidential buildings.

Those killed include 24 people described by authorities as ‘coup plotters’, some of whom were reportedly lynched while unarmed and trying to surrender. Civilians were also killed when they took to the streets following a call for protest from President Tayyip Erdogan, facing down tanks and helicopters.

In the days following the coup attempt the Turkish government has made sweeping purges within the army, judiciary and civilian branches of the ministry of interior: 7,543 ‘coup plotters’ have been detained, 318 of whom have been placed in pre-trial detention. 7,000 police have been suspended and 2,700 judges and prosecutors have been removed from their posts, representing just under a fifth of the judiciary. 450 members of the judiciary have been detained.

Statements by the President and government officials that the death penalty could be brought in retrospectively as a punishment for those found to be responsible for the coup attempt are a significant concern, as this would violate human rights conventions to which Turkey is a party, and protections within Turkey’s constitution.

“Mass arrests and suspensions are deeply worrying in a context of increasing intolerance of peaceful dissent on the part of the Turkish government, and there is a risk that this crackdown will be extended to journalists and civil society activists.  In recent months political activists, journalists and others critical of public officials or government policy have been frequently targeted and media outlets seized.

“It is more important than ever for the Turkish government to respect human rights and the rule of law in ways the coup plotters did not.”