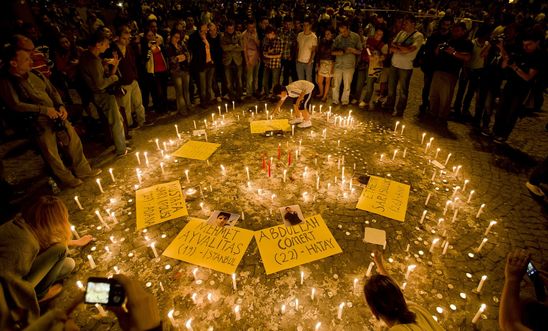 One year on from the Gezi Park protests, the government’s approach to demonstrations is as abusive as ever while impunity for police violence is rampant, Amnesty International said in a report published today.

“The Turkish authorities have been relentless in their crackdown on protesters - be it police violence on the streets or by prosecuting them through the courts. Meanwhile the police enjoy near total impunity. The message is clear: peaceful demonstrations will not be tolerated.

“Just in the last ten days, demonstrations across Turkey to mark the anniversary of the Gezi Park protests were banned and arbitrarily and brutally dispersed with tear gas, water cannons and beatings. The government must change course, allow peaceful protest and ensure accountability for police abuses.”

Amnesty International’s report, Adding injustice to injury: Gezi Park protests one year on, examines developments following the small protest against the destruction of the park in central Istanbul which spiralled into nationwide anti-government demonstrations. It calls on the Turkish authorities to end impunity for human rights abuses by law enforcement officials and to guarantee the right to peaceful assembly.

Eight thousand people were injured during the Gezi Park protests and at least four died as a direct result of police violence, but investigations into police abuses have stalled, been obstructed or closed. Only five separate prosecutions have been brought against police officers to date.

In stark contrast, more than 5,500 people face prosecution for organising, participating in or supporting the Gezi Park protests. Many are being prosecuted for nothing more than peacefully exercising their right to freedom of assembly. Protest organisers are being prosecuted for “founding a criminal organisation” while scores have been charged with unsubstantiated terrorism offences.

“The government must revise the law on demonstrations, remove excessive restrictions on where and when demonstrations can take place and repeal provisions used to criminalise peaceful protest.”

Doctors have been disciplined and, in two cases, criminally prosecuted for providing first aid in makeshift medical clinics during the Gezi Park protests. In January 2014, the government introduced legislative amendments which could be used to criminally punish the provision of emergency medical treatment during protests.

In a crude violation of the right to freedom of expression, criminal investigations have been started against commentators who documented the protests. They were followed by random prosecutions of people posting opinions on social media during the protests. Increased powers to shut down websites have been introduced.

“One year on from the Gezi Park protests, the Turkish authorities seem to be firmly set on the path of intolerance, conflict and polarisation. Unless checked, this will lead to further violations of human rights in the country.

“It is not too late for the government to change course. However, this requires the political will to acknowledge legitimate grievances and reach out to the disaffected; to accept criticism and to respect the right to freedom of assembly; to stay the prosecution of peaceful protesters and to ensure accountability for police abuses.”

On 3 June 2013, Hakan Yaman, was beaten up and thrown on a fire by four riot police officers and a person in plain clothes operating next to a water cannon vehicle. A witness recorded the incident on his mobile phone. Despite the number of the water cannon vehicle visible in the video, the Istanbul police authorities have failed to reveal the identities of the officers assigned to work alongside it.

Five members of Taksim Solidarity, a coalition of over 100 NGOs, political groups and professional bodies that came together to oppose the redevelopment of Gezi Park, stand accused of “founding a criminal organisation”, “provoking others to participate in an unauthorised demonstration”, and “refusing to disperse from an unauthorised demonstration”. There is no evidence in the indictment that the five people participated in or incited violence or any other conduct not protected by human rights law. All five face up to 15 years imprisonment.

Twenty-nine young people in Izmir are on trial for “inciting the public to break the law”. Three of the defendants are additionally charged with defaming the Prime Minister. The case is based entirely on tweets that were sent about the first weekend of the protests. They provide information, such as where the police were using force against demonstrators, available wireless passwords or contain opinions and messages of support for the demonstrations. None of the tweets in the indictment contain any incitement to, or indication of participation in, violence. A number of the tweets are said to defame the Prime Minister, who intervened in the case and is listed as a “victim”. After two hearings the case was postponed until 14 July 2014.