Turkey: End of state of emergency not enough to reverse "suffocating" crackdown 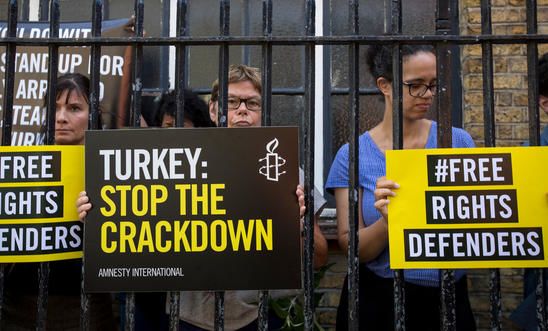 The state of emergency in Turkey - declared in July 2016 as a temporary measure following the failed coup attempt – will not be renewed when it expires at the end of the day today.

“Whilst the lifting of the two-year state of emergency is a step in the right direction, it needs to be accompanied by urgent measures if it is to be anything more than a cosmetic exercise.

“Over the last two years, Turkey has been radically transformed with emergency measures used to consolidate draconian powers, silence critical voices and strip away basic rights. Many will remain in force following the lifting of the state of emergency.

“Hundreds of journalists, human rights defenders and activists, including Amnesty International Turkey’s, Taner Kılıç, have been detained simply for doing their jobs.

“Tens of thousands of people have been locked up by a judiciary that lacks the most basic independence and incarcerates real or perceived critics of the government without evidence of any actions that can reasonably constitute offences. NGOs and newspapers have been shut down and more than 130,000 Turkish public sector workers arbitrarily dismissed under emergency decree.

“The lifting of the state of emergency alone will not reverse this crackdown. What is needed is systematic action to restore respect for human rights, allow civil society to flourish again and lift the suffocating climate of fear that has engulfed the country.”