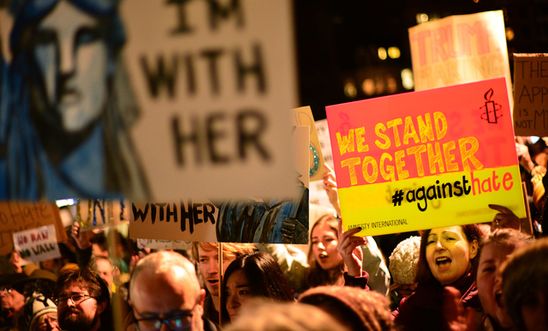 Amnesty International will be highlighting its human rights concerns over the policies of the new US administration of President Donald Trump during protests in central London on Monday 20 February.

Protests are expected in Parliament Square from 6pm to coincide with a debate in Parliament over the prospect of a Donald Trump state visit to the UK later this year. 20 February will also see the One Day Without Us protest, a national day of action in solidarity with migrants from around the world who are living, working and studying in the UK.

Amnesty has been strongly critical of several new measures from the US government - including plans for a wall on the Mexican border (“a dangerous move”), a 90-day seven-country travel ban (“discriminatory and unlawful”), a 120-day halt to its refugee resettlement programme (“malicious and divisive”), and a complete halt to funding for global NGOs that use non-US funding to provide abortion advice or referrals (“a devastating blow for women’s rights”).

“Some of our worst fears over what a Donald Trump presidency might lead to have already been realised.

“There’s now no room for doubt - we’ve got an enormous fight on our hands to safeguard the basic rights we all hold dear.

“In the end the point isn’t whether Donald Trump gets the full-blown UK state visit treatment - it’s whether we raise our voice against this disastrous roll-back of rights. It’s a major human rights fight, and one we can’t afford to lose”.

Amnesty has also been urging the UK prime minister Theresa May to “strongly condemn” the USA’s travel ban and refugee resettlement freeze.

Amnesty International is publishing its Annual Report on the State of the World Human Rights on Wednesday 22 February, a comprehensive analysis of the global state of human rights, including 159 country breakdowns. There will be an embargoed press conference at Amnesty International UK’s east London office (17-25 New Inn Yard, London EC2A 3EA) at 10.30am on Tuesday 21 February (please arrive by 10am; RSVP: louise.orton@amnesty.org.uk).