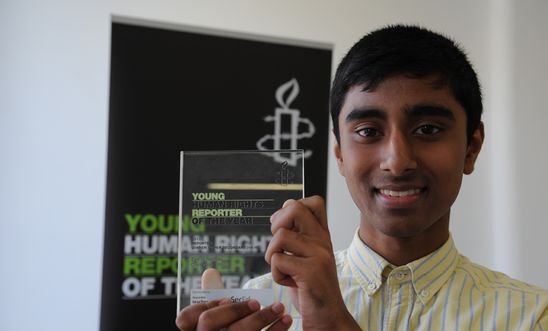 Two award-winning authors and a globally-acclaimed playwright joined forces today to call on Britain’s youngsters to pick up a pen over the holiday period and enter Amnesty’s inaugural Youth Awards.

Meanwhile, Tom Stoppard, famed for his plays such as Rosencratz and Guildenstern Are Dead, The Real Thing and The Invention of Love, has also lent his support to the Awards.

“Who has not been humbled and inspired by the figure of the young woman Malala on the world stage? How many other young human rights reporters are out there waiting to speak up on subjects they feel impassioned about? They, like Malala, have the potential to fight injustice and inequality through the power of the word.

“I am honoured to have been invited to be part of the Awards in the company of these young emerging voices.”

“I am delighted to be asked to be a judge for Amnesty's Youth Awards. Throughout my life I have always cherished the power of the written word. It has such potential to both change and inform the world.

“If this competition can help encourage more young people to pick up the pen or start typing away then that can only be better for everyone. And on a personal level I am already looking forward to reading the entries.”

“Art can change things in the longer term but, if you want to change the world in the short term, journalism is the most effective weapon.”

“Journalism plays a fundamental role in helping exposes human rights abuses and we hope that this competition will help encourage the journalists of tomorrow to take up that mantle.”