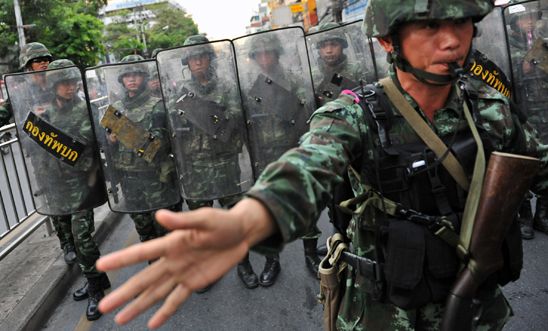 Thai army soldiers stand guard on a city centre street as a anti-coup rally is held nearby on 26 May 2014 in Bangkok, Thailand © 2014 Getty Images

Hundreds of arbitrary detentions, torture, sweeping restrictions on freedom of expression and unfair trials in military courts are creating a climate of fear in Thailand Amnesty International said today (11 September) in a new report.

The 65-page report, 100 days under Martial Law, is the first comprehensive investigation into Thailand’s human rights situation since the military imposed martial law on 20 May, seizing power two days later.

“Three months since the coup, a picture emerges from our investigations of widespread and far-reaching human rights violations perpetrated by the military government.

“It has become part of the military government’s modus operandi to crack down on the smallest forms of dissent, such as wearing T-shirts that could ‘promote division’ or reading certain books and eating sandwiches in public in symbolic protest against military rule.

“Thailand has international human rights obligations that cannot be ignored in the name of ‘national security’ – current restrictions on freedoms are far too sweeping.”

Freedom of expression and peaceful assembly

The military authorities have also imposed sweeping restrictions on the rights to freedom of expression and peaceful assembly, which has had a chilling effect on public debate and led to widespread self-censorship.

Hundreds of websites have been taken down or blocked, “censorship panels” have been set up to monitor media, and people have been threatened with imprisonment for posting anything deemed critical of the military online.

A ban on gatherings of more than five people has been in effect since martial law was imposed, in clear violation of the right to freedom of peaceful assembly.

Sandwiches became symbolic of peaceful resistance at one point, leading State-run newspapers to warn people against eating sandwiches, and a senior police chief to say they are keeping a close eye on sandwich eaters.

On 22 June in Bangkok, at least eight students gathered in preparation for a public show of defiance against the coup and new laws restricting the rights to freedom of expression and peaceful assembly. The students planned to eat sandwiches and read books as a form of protest but the military and police arrested and detained eight of them before they could hold their demonstration.

In an effort to “adjust attitudes” and stifle dissent, the military government – known as the National Council for Peace and Order (NCPO) – has engaged in systemic arbitrary arrests and the detentions of hundreds of people, many of them supporters of the former government.

Although most weren’t held for longer than seven days, they were detained without charge or trial, denied access to lawyers and were sometimes held incommunicado. They are now living with the threat of prosecution after signing waivers promising not to engage in “political activity” as a pre-condition for release.

When the military took over, they summoned several hundred people they deemed problematic, and ordered them to report to the authorities. Many refused. The military and police have detained or threatened to detain family members of some of those refusing to report. Several individuals face prosecution for disobeying the military’s order to report and have had their passports revoked.

Torture and other ill-treatment

Amnesty has received credible reports of a number of people being tortured, ranging from beatings and asphyxiation to mock executions.

Kritsuda Khunasen, a political activist who was detained on 27 May, said she was repeatedly beaten by soldiers and asphyxiated with a plastic bag during interrogation. She said:

“If I was too slow when answering, didn’t speak, didn’t answer the question in a direct manner … I was beaten with a fist to my face, stomach and body… The worst that I experienced was when they placed a plastic bag over my head, tied up the ends and put a cloth bag over my head. This knocked me unconscious and I was brought back by throwing water on me… I finally knew what it felt like to be in constant fear of death.”

Restrictions on the rights to freedom of expression and peaceful assembly have had serious implications for the vital work of human rights groups, including the Amnesty office in Thailand.

The military authorities have ordered the prosecution of civilians in military courts for breaching military orders which themselves violate key human rights. Sixty individuals are currently facing trials in military courts, with no right of appeal.