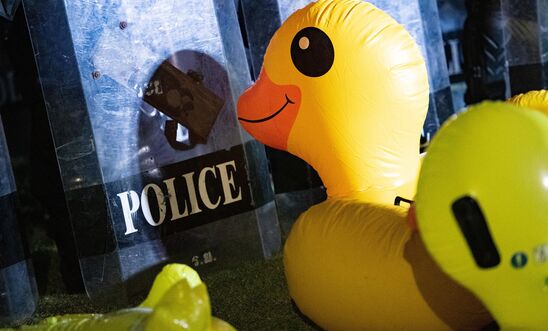 The report, My Face Burned As If On Fire, analyses the past year of Thai protests, painting a detailed picture of the excessive and unlawful use of force against largely peaceful protesters.

Multiple people reported the excessive use of chemical irritants on crowds, including in tear gas and water cannon discharge. Victims suffered extensive injuries, including severe burns and nose bleeds.

Eyewitnesses and victims also described many incidents of dangerous policing, from the aiming of high-pressure water cannons at people’s heads to the reckless firing of rubber bullets into crowds.

“Bystanders and protesters, most of them not engaged in any unlawful or violent behaviour, suffered traumatic violence at the hands of the police. People were beaten, hit by rubber bullets and tear gassed, all because they dared to gather peacefully and express themselves.

“As protests grew in scale throughout the year, Thai authorities comprehensively failed to de-escalate a volatile situation, and put large numbers of people in danger, including children.”

Police beatings as part of crackdown

Across Thailand, protesters took to the streets to demand democratic reforms throughout 2020 and into 2021. As the protest movement grew, so too did the severity of the Thai police’s response.

Eyewitnesses and verified video evidence show water jets discharged from a distance of 10 metres against protesters, safety marshals, journalists, and observers. The jets were sometimes aimed at the upper body and head. On other occasions, they were deployed indiscriminately at protesters pressed tightly together, and unable to move or find cover.

Amnesty documented police beatings, as well as the unlawful use of rubber bullets, during a protest on 28 February this year.

Victims and eyewitnesses said that police kicked protesters, and hit them with shields and batons. Police also struck protesters on the head, neck, back and abdomen, even after they had been apprehended and restrained.

One 16-year-old protester told Amnesty: “They tied my hands behind my back with cable ties. After that, they kept kicking me and beating me up with batons. They used batons to beat me all over my body, my neck, my limbs, my head, my back. That was not an arrest. That was battery.”

Eyewitnesses also told how rubber bullets were fired by riot police after protesters started to retreat peacefully. Rubber bullets and casings were found at the protest site.

Unlawful use of chemical irritants and tear gas

During a protest on 17 November 2020, people reported experiencing coughing, skin and eye irritation, chemical burns, breathing difficulties, burning sensations in the nose, lungs and skin, and nose bleeds after inhaling chemicals released from tear gas canisters, or being hit by jets from water cannon.

One 24-year-old told Amnesty: “I felt like my face was burning and I couldn’t breathe. The gas mask didn’t help at all. I was knocked out. I [only] became conscious later at the hospital.”

At two locations near Bangkok’s Parliament House, riot police fired tear gas and water cannons laced with irritants at peaceful protesters. Chemical irritants were repeatedly used on the protesters for a period of five-and-a-half hours.

One protest guard, who was volunteering to manage crowds and ensure demonstrators’ safety, described being targeted for several hours by water cannon and tear gas. He said: “I felt fatigued. Drenched all over my body. I was so battered, I was numb with pain.”

Since the military coup in 2014, the Thai authorities have persistently targeted and persecuted activists, human rights defenders, journalists, political opponents and others for expressing views critical of government action.

Since July 2020, at least 679 people have faced criminal charges for joining peaceful protests, 43 of them children, according to Thai Lawyers for Human Rights

Amnesty International is calling on the Thai authorities must immediately drop all charges against activists targeted for exercising their right to protest.

“The Thai authorities are using violence and judicial harassment to quash nationwide discontent. These fear tactics are only helping to highlight many of the protesters’ grievances, further fuelling the protests.

"It is time for a new approach - one which recognises that Thailand’s protests are overwhelmingly peaceful, and grounded in the human rights to free assembly and expression.

“Ultimately, this youth movement is a plea for dialogue. The authorities should not respond with batons, water cannon, chemicals and bogus lawsuits.”