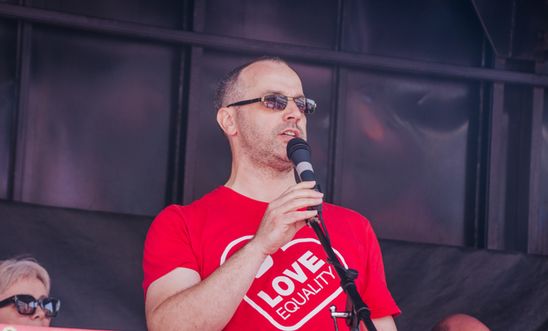 Marriage equality campaigners have welcomed a pledge by Taoiseach Leo Varadkar to work to end discrimination against LGBT+ people in Northern Ireland.

At an event in Dublin Castle yesterday (Sunday) evening celebrating 25 years to the day of the decriminalisation of homosexuality in Ireland, the Irish prime minister said:

“In the United Nations and around the world, I as Taoiseach and Ministers will speak up for LGBT civil rights in other countries, countries that still criminalise or discriminate, whether it’s central or eastern Europe, whether it’s in the Arab world, or whether it’s not too far away in Northern Ireland.”

The announcement was met with some of the loudest cheers and applause of the evening, from an audience of over 700 people mostly drawn from the LGBT+ community across Ireland, including representatives of groups from Northern Ireland.

“We welcome this latest public statement of support from the Taoiseach.

“At a time when there has been no devolved government at Stormont for 18 months, and the UK government has turned its back on the LGBT+ community here, it is all the more important to hear the Taoiseach speaking out about the continued discrimination faced by people in Northern Ireland.

“Theresa May should take note that a prime minister of our next-door neighbour is speaking about the UK in the same breath as parts of the world infamous for discrimination against LGBT+ people.

“This discrimination against gay people in Northern Ireland is now happening on the Prime Minister’s watch. She has the power to end it, but is choosing not to act. We thank Leo Varadkar for his pledge to keep speaking out around the world until that changes.”

Earlier this month, thousands of people marched in Belfast and Derry / Londonderry to demand that the UK government introduce marriage equality legislation for Northern Ireland.

Northern Ireland is the only part of the UK or Ireland that still bans marriage for same-sex couples, despite majority support among the public and in the Northern Ireland Assembly. In November 2015, a majority of MLAs in the Assembly voted to support equal marriage, but the measure was blocked by the DUP using a Petition of Concern, a voting mechanism designed to protect the rights of minorities in Northern Ireland.

Last month a backbench bill from Armagh-born MP Conor McGinn, which would legalise same-sex weddings in Northern Ireland, was blocked by a single objection from a member of Theresa May’s Conservative Party.