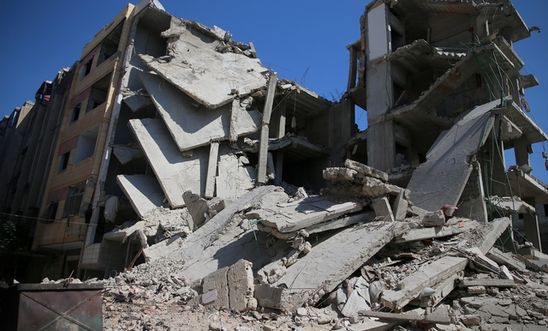 At least ten civilians have been killed in recent cluster munition attacks. A truce was announced in Eastern Ghouta earlier this week, though there have been recent reports of continued shelling from Syrian government forces.

Photographs shared by activists in Eastern Ghouta, which have been verified by an Amnesty arms expert, show remnants of cluster munitions from attacks that have taken place in the past ten days, including one on 19 November. The photos show Soviet-made ground-launched 240mm 3O8 cluster munitions projectiles containing up to ten sub-munitions. According to Landmine and Cluster Munition Monitor, these first appeared in Syria after Russia began missile strikes against anti-government groups in September 2015. Such weapons are banned by more than 100 countries due to the enormous danger presented to civilians by their indiscriminate nature.

“The Syrian government has shown callous disregard for the lives of the hundreds of thousands of people living in Eastern Ghouta since it laid siege to the area in late 2012.

“The Syrian government is committing war crimes on an epic scale in Eastern Ghouta.

“Amid a worsening malnutrition epidemic, Syrian forces must immediately end the unlawful siege of Eastern Ghouta and allow unimpeded access to humanitarian organisations before an already catastrophic situation claims yet more civilian lives.

“There are around 400,000 civilians struggling to survive under daily, often hourly, bombardment, without access to food and medical care.

“Russia, as a party to this conflict has a particular responsibility to ensure that its ally, the Syrian government, ends this unlawful siege and stops committing war crimes.”

Amnesty interviewed several people currently under siege in Eastern Ghouta, among them activists and medical professionals, who described a severely deteriorating situation since the government escalated its bombing of the enclave since 14 November.

Amnesty interviewed two people who witnessed an attack by Syrian government forces using cluster munitions on al-Quawtli, a densely-populated residential neighbourhood close to the Grand Mosque in Douma. Mustafa, a volunteer with the civil defence rescue group, witnessed an attack on a crowded market on 19 November. He told Amnesty:

“I heard the launch of the rocket because the government military base is close. Then I clearly saw parachutes strapped to small bombs falling and, ten seconds later, a series of explosions echoed. After that, the shelling continued but the sound was different. I went to the scene of the attack and saw injured people on the floor, including women, children and men. Several people later died of their injuries.”

Activists told Amnesty that Syrian government forces also attacked residential areas with imprecise, improvised rockets such as “Elephant rockets”, so named because of their distinctive noise upon launch. According to the Violations Documentation Center in Syria, a local monitoring group, 97 civilians were killed in ground and air attacks by government forces between 14 and 26 November.

Muhammad, a media activist, witnessed an attack that hit a residential building. He recalled:

“The missiles struck two residential buildings surrounding a market, which is usually crowded with shops and children playing. At the scene of the attack, I saw the civil defence removing the body of a girl around six years old. Her name is Ghina. Her family survived but she didn’t. She was in one of the buildings that was hit. Thankfully, the warplane didn’t hit the market or else there would have been more casualties.”

Since February this year, when Syrian government forces captured the areas of al-Qaboun and Barze, which both border the Harasta neighbourhood of Eastern Ghouta, smuggling tunnels that had for years guaranteed a minimum flow of food, water and medical supplies to the people of Eastern Ghouta have been closed. As a result, the humanitarian situation has rapidly deteriorated and food prices have increased exponentially, while hospitals have struggled to treat patients due to depleting stocks.

On 3 October, the Syrian government further tightened the siege by closing the last remaining entry point to Douma, the al-Wafideen checkpoint. Muhammad, a media activist in Eastern Ghouta, told Amnesty how medical workers are struggling to provide adequate care to people facing malnutrition and injury:

“Outsiders think we are exaggerating, but we are not. We barely have food. My wife and I had to cut down by half the amount of food we are eating. It is impossible to afford to buy food with the current prices, which are four times more than before.”

According to a recent World Health Organisation report, by mid-November a 700g bundle of bread was 85 times more expensive in Eastern Ghouta than in Damascus, located less than ten miles away. Hoda, a doctor working in one of the field hospitals in Eastern Ghouta, said:

“Hospitals are now relying on humanitarian aid convoys that are rarely allowed to enter. The last humanitarian aid convoy that entered Kaferbatna [a neighbourhood in Eastern Ghouta] was a month ago [October]. It carried a very small amount of medical aid. We need fuel, anaesthetics, oxygen, antibiotics … We are seriously running out of these supplies. The children are suffering the most. I am receiving lots of cases of malnutrition. They need food for energy and their immune systems, but their families can’t afford to buy them any food so they end up eating barley, which is affordable, once a day. That’s it. We don’t have cases of children dying from malnutrition but all of the children who come to me are skeletons, bones and flesh. One child I saw is ten months old and weighs 800g. All of the children are underweight without any exception.”

In October, the UN said that 232 children in Eastern Ghouta were suffering severe acute malnutrition.

Earlier this month, Amnesty released a report on mass displacement inside Syria, exposing the government’s strategy of prolonged sieges - dubbed “surrender or starve” tactics - with the aim of forcibly displacing entire populations. In 2015, Amnesty published a report documenting the unlawful siege of Eastern Ghouta.