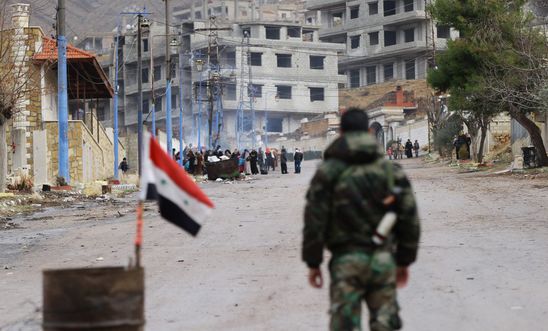 The Syrian government has used starvation as a method of warfare

Armed opposition groups have also used sieges, bombardments and starvation to force thousands of civilians to leave their homes

Report comes ahead of fresh talks in Geneva this month

Whole civilian populations in Syria who’ve suffered horrific sieges and been subjected to intensive bombardments have been given no choice but to leave or die under so-called “reconciliation” agreements between the Syrian government and armed opposition groups, said Amnesty International in a comprehensive new report today.

The agreements, reached between August 2016 and March this year, have led to the displacement of thousands of residents from six besieged areas: Daraya, eastern Aleppo city, al-Waer, Madaya, Kefraya and Foua.

Amnesty’s 83-page report, ‘We leave or we die’: Forced displacement under Syria’s ‘reconciliation’ agreements, which comes ahead of Syria talks in Geneva later this month, examines four of these local pacts, documenting human rights violations dating back to 2012.

Having interviewed 134 people, including displaced residents who have lived through sieges and attacks, as well as humanitarian workers, journalists and UN officials, Amnesty said that Syrian government’s sieges, unlawful killings and forced displacement constituted crimes against humanity.

Amnesty also reviewed dozens of videos and analysed satellite imagery to corroborate witness accounts. The organisation sought comments on its findings from the Syrian and Russian authorities, which did not reply, and from the Ahrar al-Sham Islamic Movement, which did.

Describing the final days under siege before an agreement was reached in Daraya near Damascus, a lawyer from the city told Amnesty:

“The last ten days before the evacuation were a nightmare. The amount of shelling was a clear signal that the government wanted us to leave … and the last five months of the shelling were equal to the past five years of airstrikes and ground attacks … That was enough for me to make me want to leave. Also, how will civilians stay if there is no infrastructure, no hospitals, electricity or water? The government made its objective to destroy everything and leave us with nothing to stay behind for.”

Meanwhile, a man who was part of a negotiations committee in Daraya told Amnesty how the local reconciliation deal was reached:

“The regime would offer a truce or settlement and continue to place military pressure to force us to acquiesce. This was the concept. After we received an offer from these intermediaries, the following day there would be a military escalation to strike fear in people’s hearts and make them plead for a solution.”

“While the Syrian government’s stated aim has been to vanquish opposition fighters, its cynical use of ‘surrender or starve’ tactics has involved a devastating combination of sieges and bombardments. These have been part of a systematic, as well as widespread, attack on civilians that amounts to crimes against humanity.

“If the Syrian government, as well as armed opposition groups such as the Ahrar al-Sham Islamic Movement and Hay’at Tahrir al-Sham, are serious about reconciliation, they must immediately put an end to these unlawful practices, lift sieges and end attacks on the thousands of civilians who remain besieged across Syria.

“All states should co-operate to bring an end to the dark stain on the world’s conscience that ongoing impunity for such crimes represents. There is no simpler way for them to do so than to provide support and resources to the International, Impartial and Independent Mechanism recently established by the UN to assist in investigating and prosecuting those responsible.”

Testimonies of those under siege

Since the beginning of the armed conflict in Syria, the Syrian government has imposed sieges on populated civilian areas, using starvation as a method of warfare, and blocking or arbitrarily restricting access to basic necessities - including food, water, medicine, electricity, fuel and communications. It has also blocked aid organisations from entering besieged areas. The effects have been devastating, pushing populations to the brink of starvation and causing people to die from otherwise treatable conditions. A former medic in Daraya told Amnesty:

“When we got cases of kidney failure, there was nothing we could do about it because we did not have dialysis machines. So we would watch the patients die in front of our eyes and we could not offer them anything.”

Mothers who gave birth under the siege told Amnesty how their infants suffered due to insufficient breast milk and lack of baby formula. In a testimony echoed by other women, a 30-year-old mother from Daraya who gave birth in March 2016 said her daughter was born small and weak:

“I would breastfeed her, but it was not filling; she was very frail and there was nothing I could do. We had no other alternatives so she would cry a lot and I couldn’t do anything … How could someone who had just given birth and was breastfeeding sustain themselves on soup?”

The Syrian government and armed opposition groups have restricted and blocked access to humanitarian and medical aid crucial for survival, especially when people could not afford the inflated prices of goods and medicine. As a result, residents have had to survive on one meal per day.  A mother of three who became the sole carer of her grandson after his parents were killed in two separate attacks in 2015 in eastern Aleppo, told Amnesty:

“The siege was horrible for people who had no income such as my family. The humanitarian aid organisations were not able to continue their work due to the relentless attacks including on their warehouses … It was very difficult to provide the basic needs for children such as nappies and milk. The price of vegetables was so high that it was impossible for me to afford it. The siege didn’t affect me as much as it affected the children. My grandson, almost two years old, was deprived of baby milk and other necessary nutrients because I either couldn’t afford it or humanitarian aid organisations no longer had it.”

The Syrian government and allied militias destroyed local food supplies by burning agricultural fields in Daraya and Madaya. Amnesty’s analysis of satellite imagery shows the massive decrease in agriculture over the years and an obvious dead zone around Daraya. A former teacher in Madaya told Amnesty:

“The government and Hezbollah forces burned the agricultural fields, just as a form of punishment, even though we couldn’t access them.”

In addition to the immense suffering caused by siege tactics, deliberate attacks on civilians and civilian objects have brought unimaginable misery.

Civilians said government forces particularly intensified their attacks shortly before they were pushed out, to speed up the surrender of these areas. The Syrian government stepped up the assault on al-Waer on 7 February 2017, pushing it toward surrender a month later. Daraya’s only hospital was attacked and burned several times, rendering it unusable shortly before the city was depopulated.

For the residents of eastern Aleppo, the worst suffering was caused by the Syrian and Russian forces’ brutal and calculated campaign of unlawful aerial attacks, where civilians, homes and hospitals were deliberately targeted and whole neighbourhoods indiscriminately attacked by shelling and air strikes, including with internationally-banned cluster munitions, “barrel bombs” and incendiary weapons. One Aleppo resident told Amnesty:

“You need months before you die of starvation. The air strike attacks were a different story. You could die from a piece of shrapnel in a fraction of a second. Nobody was protected from the air strikes and shelling. Civilians, rebels, buildings, cars, bridges, trees, gardens etc. were all a target.”

The report covers ten attacks on civilian neighbourhoods in Aleppo between July and December 2016. The organisation’s analysis of satellite imagery shows how the attacks were carried out far from the front lines and with no apparent military objectives close by, destroying hundreds of structures including residential buildings, a market and hospitals. Armed opposition groups also killed and injured hundreds of civilians when they indiscriminately shelled the besieged towns of Kefraya and Foua using explosive weapons with wide-area effects. These attacks violated international humanitarian law and, in many cases, amounted to war crimes. A former taxi driver from Kefraya told Amnesty:

“We were scared to send our two children to school because of the shelling, as well as the snipers who shot at the children when they saw them dressed in blue uniforms on their way to school. We found ways to get the students safely to school but it was still dangerous because the shelling was unpredictable.”

In the past year, especially since April 2017, parts of the international community such as the European Union and Russia have expressed their wish to support reconstruction efforts in Syria. However, it is unclear what measures the Syrian government will take to ensure that the displaced can return safely and voluntarily to reclaim their homes. Thousands of families are now living in makeshift camps with limited access to aid and other basic necessities and scant opportunities to make a living.

Downloads
‘We leave or we die’: Forced displacement under Syria’s ‘reconciliation’ agreements