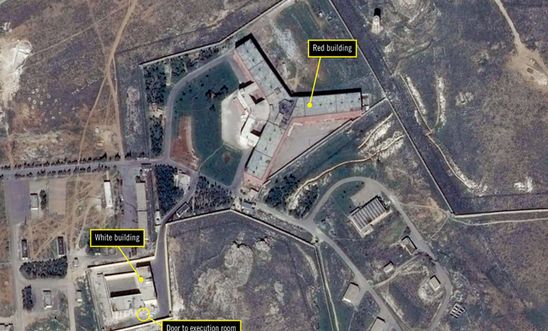 It's likely that some of the deaths occurred in the government's Saydnaya military prison, notorious for torture and secret large-scale executions © Google Earth 2016/CNES/Astrium

Remains must be returned to families and full information over circumstances disclosed, after 161 deaths confirmed

At least 82,000 people have been forcibly disappeared by Syrian government since 2011, with many tortured and killed

Responding to reports that the Syrian government has confirmed in public records the deaths of at least 161 people known to have been forcibly disappeared since the start of the conflict in 2011, Diana Semaan, Amnesty International’s Syria researcher, said:

“Scores of Syrian families are today confronting a fresh kind of pain. For years they have suffered the unbearable agony of not knowing what had become of their missing relatives.

“Now they have received the devastating confirmation that their loved ones are dead - and are plunged into a new cycle of mourning.

“The Syrian government must immediately return the remains of these victims to their families to allow for proper burials and funeral rites, and inform their relatives of the circumstances of the enforced disappearances and deaths of their loved ones.

“At least 82,000 people have been subjected to enforced disappearance since the start of the conflict. It is time for the Syrian authorities to put an end to the mental anguish and torture of families desperate to know the truth about the fate of their loved ones.

“Russia, Iran and Turkey must use their influence to pressure the Syrian government and armed opposition groups to allow independent monitors to access detention centres, to reveal the names and whereabouts of those who have been forcibly disappeared or abducted, and to allow detainees the opportunity to speak with their families.”

Prominent activists among the dead

Amnesty can confirm that among the 161 confirmed dead, there are three prominent activists Amnesty has previously campaigned for: Yehya Shurbaji, Ma’an Shurbaji, and Islam Dabbas. Their deaths were indicated in family certificate records issued by local civil registry offices.

Amnesty’s 2015 report ‘Between prison and the grave’: Enforced disappearances in Syria shows how the Syrian authorities have arrested and forcibly disappeared large numbers of peaceful government opponents and individuals they considered to be “disloyal”. The report also documented the abductions, torture and summary killings carried out by armed opposition groups.

According to the Syrian Network for Human Rights, 82,000 people have been subjected to enforced disappearance by the Syrian government since 2011.