Syria: one year on, Coalition refusal to accept responsibility for Raqqa deaths is 'insult' to civilians 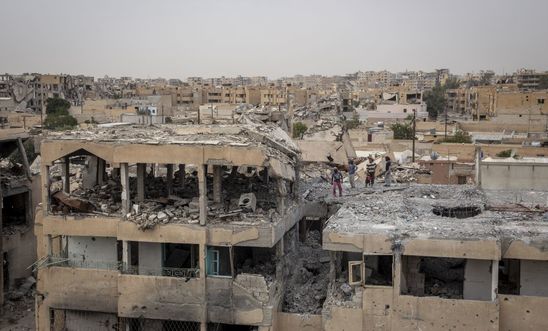 Even a year on from the end of the battle, the scale of devastation in Raqqa is still evident © Amnesty International

Year after Raqqa battle, despite its attacks killings hundreds of civilians, Coalition admits it will neither investigate deaths or compensate families

The US-led Coalition’s ongoing failure to admit to - let alone adequately investigate - the shocking scale of civilian deaths and destruction it caused in the Syrian city of Raqqa is an insult to the survivors trying to rebuild their lives and their city, said Amnesty International today (15 October), one year after the offensive to oust Islamic State from Raqqa.

On 17 October 2017, following a fierce four-month battle, the Syrian Democratic Forces - the Coalition’s Kurdish-led military partners on the ground - announced victory over ISIS, which had used civilians as human shields and committed other war crimes in besieged Raqqa.

However, winning the battle came at a terrible price. Almost 80% of the city was destroyed - possibly the most extensive destruction of a city in modern conflict - and many hundreds of civilians lay dead, the majority killed by the Coalition’s bombardment.

In a letter to Amnesty on 10 September 2018, the US Department of Defense - whose forces carried out most of the airstrikes and all the artillery strikes on Raqqa - made clear it accepts no liability for the civilian casualties it caused. The Coalition said it does not intend to compensate survivors and relatives of those killed in Raqqa, and refuses to provide further information about the circumstances of strikes that killed and maimed numerous civilians.

In what it called its “final response” to Amnesty, the Defense Department said it does not consider itself bound to answer further questions about the circumstances and reasons behind launching its attacks.

The Defense Department also spuriously asserted that Amnesty’s researchers and military experts do not understand international humanitarian law (the laws of war). It suggested that Amnesty based its initial case that the law had been broken on the deaths of civilians alone. In doing so, it chose to ignore evidence that, in the cases documented by Amnesty, ISIS fighters were not present at the scene of airstrikes that killed and injured civilians - a key part of the analysis. Amnesty strongly believes this evidence provides a prima facie case that such strikes violated international humanitarian law.

“Disturbingly, the Pentagon does not even seem willing to offer an apology for the hundreds of civilians killed in its ‘war of annihilation’ on Raqqa.

“This is an insult to families who - after suffering the brutality of ISIS rule - lost loved ones to the Coalition’s cataclysmic barrage of firepower.

“One year after the battle ended, the obstacles to justice are still insurmountably high for victims and their families.

“It is completely reprehensible that the Coalition refuses to acknowledge its role in most of the civilian casualties it caused, and abhorrent that even where it has admitted responsibility, it accepts no obligation towards its victims.

“While the Coalition continues to bury its head in the sand, we will continue to work on the ground and use all the tools available to us to expose the full extent of civilian casualties and demand justice and full reparation for victims and their families.”

The Coalition’s failure to live up to its obligations to conduct on-the-ground investigations into the impact of its attacks partly explains why its civilian casualty count is implausibly low. Prior to a report by Amnesty in June, the Coalition admitted causing just 23 civilian deaths in its entire Raqqa offensive. Incredibly, a year after the offensive, the UK Ministry of Defence still maintains its hundreds of Raqqa airstrikes resulted in zero civilian casualties - a clear statistical improbability.

Following a string of blustery denials from military officials and politicians, at the end of July the Coalition quietly admitted it had caused a further 77 civilian deaths - almost all of which had been documented in Amnesty’s report. Despite this admission - a more than 300% increase on previous reports - the Coalition still refuses to provide information over the circumstances in which these civilians were killed.

In the absence of meaningful Coalition efforts to investigate the full impact of their Raqqa assault, Amnesty continues to gather evidence on civilian casualties in Raqqa. Based on  four in-depth investigations in Raqqa itself (most recently, last week), as well as military expertise and analysis of satellite imagery, Amnesty has unearthed details of numerous previously-undocumented cases in which Coalition attacks killed civilians with apparently no ISIS fighters in the vicinity. This includes 20 civilians from the Merbad and al-Tadfi families who were killed in separate airstrikes in June and September 2017.

Amnesty has also conducted further investigations into a series of Coalition strikes which killed 39 members of the Badran family and ten other civilians. The Coalition previously acknowledged responsibility for 44 of these deaths and rejected the remainder as “non-credible”. But new details pin down the exact time and date of a 10 September 2017 airstrike which killed two members of the Badran family and three other civilians, including a 70-year-old man who was Raqqa’s former attorney general.

Amnesty will soon release the full details of these and many other newly-documented cases - amounting to scores of civilian casualties still unacknowledged by the Coalition.

Downloads
Raqqa one year on