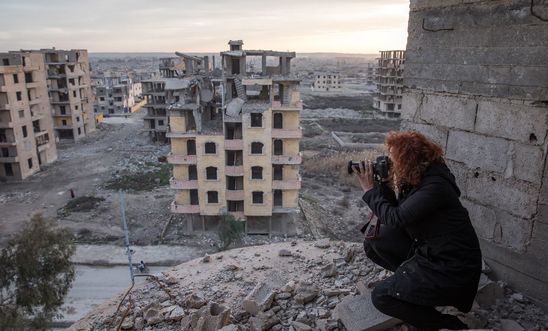 Today marks second anniversary of the anti-ISIS operation which killed at least 1,600 civilians

Marking the second anniversary of the start of the US-led Coalition’s military offensive in Raqqa, Syria, Amnesty International has launched “The Ruins of Liberation” - a multimedia storytelling site giving a behind-the-scenes look at its investigations in the bombed-out city.

Images by DiCenzo and Rovera are combined with audio commentary, with Rovera giving an intimate description of the people she met and the reality she exposed.

Rovera and her fellow researchers - including a team of specialists in remote sensing and open-source investigation - have investigated the Raqqa military campaign for over 18 months. They visited more than 200 strike sites, interviewed more than 400 survivors and witnesses, and released several reports, culminating in an unprecedented investigation in partnership with Airwars that documented the deaths of more than 1,600 civilians as a result of Coalition attacks - far more than the 180 deaths the Coalition has so far admitted.

Amnesty UK Director Kate Allen, who was in Raqqa recently, described the city - two years on from the start of the battle - as still “completely devastated”.

“On the ground in Raqqa, I witnessed a level of destruction not comparable to anything I’ve seen in decades of covering the impact of war.

“This site brings home the reality of the suffering I encountered and explains why I kept returning: to seek justice for civilians trying to piece together their lives.

“Two years on, the US-led Coalition must investigate the full scale of civilian casualties it caused, and ensure victims and their families receive full reparation and compensation.”

Amnesty UK Director Kate Allen, who was in Raqqa recently, described the city - two years on from the start of the battle - as still “completely devastated”.

‘The most precise air campaign in history’

The US-led Coalition’s campaign to oust the Islamic State armed group from Raqqa was among the most destructive in modern warfare. The offensive - lasting from 6 June to 17 October 2017 and led by US, UK and French forces - killed and injured thousands of residents, and reduced homes, businesses and infrastructure to rubble.

Civilians trapped by the fighting were prevented from fleeing by ISIS snipers and mines. Many were killed in their homes by the Coalition’s air bombardments and indiscriminate artillery strikes. Despite this, then Coalition commander Lieutenant General Stephen Townsend claimed the offensive had been “the most precise air campaign in history”.