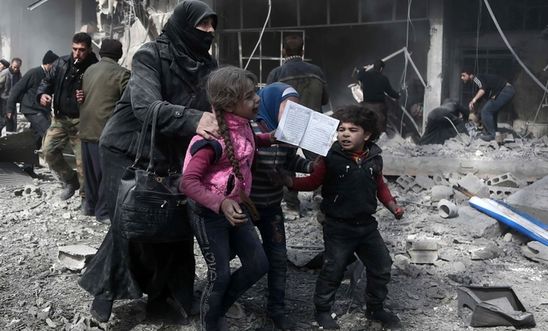 More than 1,000 civilians have reportedly been killed in the bombardment of Eastern Ghouta in recent weeks © ABDULMONAM EASSA/AFP/Getty Images

‘Every year we think it is just not possible for parties to the conflict to inflict more suffering on civilians - and yet, every year, they prove us wrong’ - Lynn Maalouf

On the seventh anniversary of the Syria conflict, Amnesty International has expressed its dismay at the “catastrophic failure” of the international community to halt the suffering of civilians in Syria.

Amnesty has gathered recent eyewitness testimony (see below) from residents and medics in the besieged enclave of Eastern Ghouta showing how civilians have been living in basements for weeks at a time in a desperate bid to escape Syrian government and Russian air strikes.

Amnesty is again calling on all parties to the conflict to immediately abide by their obligations under international law and allow safe passage to civilians wanting to flee the area, as well as providing unfettered access to humanitarian aid.

“Every year we think it is just not possible for parties to the conflict to inflict more suffering on civilians - and yet, every year, they prove us wrong.

“Right now in Eastern Ghouta, 400,000 men, women and children who have been living under an unlawful government siege for six years, are being starved and indiscriminately bombed by the Syrian government with the backing of Russia.

“The international community had said ‘never again’ after the government devastated Eastern Aleppo with similar unlawful tactics. But here we are again.

“The international community’s catastrophic failure to take concrete action to protect the people of Syria has allowed parties to the conflict, most notably the Syrian government, to commit war crimes and crimes against humanity with complete impunity, often with assistance of outside powers, particularly Russia.

“UN Security Council resolutions have been repeatedly flouted and ignored by the Syrian government and other parties to the conflict. This must end now. The Security Council must enforce its resolutions which call for an end to unlawful sieges and attacks. It must also send a strong message that those responsible for war crimes and crimes against humanity will be held accountable, by referring the situation to the Prosecutor of the International Criminal Court.”

Since 18 February, the Syrian government and Russia have escalated their bombing of Eastern Ghouta, targeting civilians as well as civilian infrastructure - including hospitals and schools. In recent days, the government forces’ advance on the enclave has split it into three areas, cut off from each other, worsening conditions for civilians who now find themselves trapped in crowded underground shelters with no access to food, water or even sunlight.

Speaking to Amnesty, a resident from Douma, the largest town in Eastern Ghouta, expressed despair over the government’s seizure of wheat fields, a crucial source of food for many:

“The Syrian government knows what they are doing. They know we survived thanks to the crops we were able to harvest, especially wheat. What’s more heartbreaking is that the fields are full of wheat. We had been waiting for April to harvest it, but the government will now be the one to benefit.”

He also poured scorn over the promise of humanitarian corridors to allow civilians to flee the violence:

“It was always a sham. Are they really expecting us to believe that they will keep us safe? The same government that shelled us and attacked us, will now protect us?”

A paramedic told Amnesty that air strikes had forced him and his colleagues to seek shelter underground. He said it was three days before they could emerge and resume some of their duties, including burying around 70 of the dead. The paramedic said his wife and daughter had been sheltering in a basement in Eastern Ghouta for the past three weeks:

“They haven’t been able to see the sunlight at all because of the heavy bombardment. The basements are overcrowded and there are cases of children fainting due to a shortage of oxygen, no sunlight, and diseases. The situation is very, very tragic.”

The director of a hospital in Douma told Amnesty many patients were cut off from medical assistance, including one woman with a kidney condition, who died waiting for treatment:

“She died all alone in the bed. She was in her 40s. She died because we didn’t have enough medicine and the convoy came in too late.”

Meanwhile, a humanitarian worker who has been holed up with dozens of families in Idleb, the northern city also being bombarded by a combination of Syrian government and Russian forces, described the dire conditions they too face:

“We are sleeping on concrete. There are no windows. No fresh air. No water. No hygiene whatsoever. It is horrible. I hear people coughing, especially children. My daughter, who is two, and I are suffering from shortness of breath. In the beginning, we had one tank of oxygen but we don’t have that anymore. We keep getting new families. We can’t all sleep at the same time because there is no space, so we take turns.”

Like many Syrians, the humanitarian worker expressed deep distrust of the government. She said:

“We hear rumours of reconciliation but that can never happen. The government hates us. If the government enters Eastern Ghouta, they will detain my husband because he is a man, even if he is not a fighter. They will take him and force him to fight with the army. Death will follow us wherever we go. Nowhere is safe for us. Not Idleb, not Eastern Ghouta.”

Amnesty has documented massive human rights violations taking place in Syria since the onset of the crisis in 2011, highlighting, for example, the plight of people forcibly disappeared and tortured in government prisons (including the notorious Saydnaya facility), and the government’s repeated use of surrender or starve tactics in areas besieged by its forces.

To date, more than 400,000 people have lost their lives in Syria, many more have been injured, and 5.6 million refugees are scattered around the world. More than 75,000 people remain forcibly disappeared at the hands of the government, and more than 8,000 have been abducted by armed opposition groups and the Islamic State armed group.