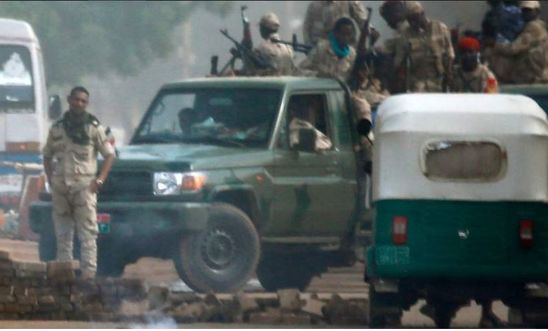 Amnesty International today called on the international community to consider all forms of peaceful pressure, including targeted sanctions, on those members of the Sudanese transitional authorities responsible for this morning’s violent attack on sleeping protesters.

At around 4.30am, armed forces under the command of the Transitional Military Council (TMC) attacked peaceful protesters in Khartoum State, firing live bullets and tear gas, setting tents on fire and beating protesters.

The number of people reported dead currently stands at 13 and is growing as more succumb to injuries. More than 100 people are being treated for various injuries, according to the Central Committee of Sudanese Doctors. Amnesty has received reports that security forces also attacked at least two hospitals close to the sit-in area in Khartoum - Almoalim and Royal Care hospitals - in pursuit of the injured.

“Many of those attacked this morning were sleeping when the Rapid Support Forces and other Sudanese security agencies began unleashing deadly violence.

“With this senseless slaughter the TMC has completely destroyed the trust of the Sudanese people and crushed the people’s hope for a new era of respect for human rights.

“The United Nations Security Council should immediately put pressure on the interim military authorities to end these attacks against peaceful protesters, and must consider targeted sanctions on members of the TMC and others involved in the attack.

“The Sudanese people suffered for decades under the repressive rule of Omar al-Bashir, and his ousting should have represented a new chapter of respect for human rights.

“Today’s bloodshed shows that the transitional authorities have utterly failed to turn the page on Sudan’s appalling human rights record, and the international community must take immediate action to show this will not be tolerated.”

At around 3.00am local time, the Sudanese Professionals Association (SPA), which has been organising protests since December 2018, issued warnings of an imminent attack by security forces aimed at breaking a sit-in outside military headquarters in Khartoum, where protesers have been camped since 9 April.

At 4.30am, around 100 security vehicles with heavy weapons and hundreds of soldiers, parked in front of the sit-in area. Within 30 minutes, the Rapid Support Forces and other security forces attacked sleeping protesters, firing live bullets and tear gas, setting tents on fire and brutally beating protesters.

On 30 May, the TMC had issued a statement claiming the protestor sit-in had been infiltrated by “uncontrollable elements” and had therefore become a hotspot for crime and a threat to the protesters. On the same day, the TMC wrote to diplomatic missions asking them to stay away from the protest site.

In an interview with Sky News on 3 June, TMC spokesman Lieutenant-General Shams al-Din Kabashi confirmed that the security forces attacked “some saboteurs” in the nearby Colombia area along Nile Street, but denied attacking the sit-in area.

Protesters in Port Sudan, Gadarif and Sinja were also attacked by security officers, according to Nazim Seraj, a leading member of a civilian committee responsible for the treatment of injured. Security forces have also been beating protesters, stealing their phones and money and then releasing them.