Stansted 15: Amnesty to observe trial amid concerns for anti-deportation activists 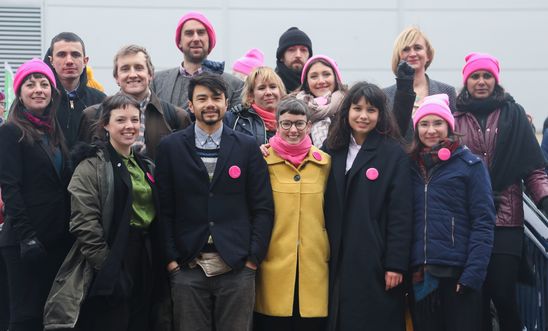 The 15 anti-deportation activists were trying to prevent what they believed was the unlawful deportation of a group of people at Stansted airport. © Kristian Buus

Amnesty considers the 15 to be human rights defenders

Amnesty International will be attending the trial of 15 human rights defenders set to go on trial at Chelmsford Crown Court next week (Monday 1 October) relating to their attempt to prevent what they believed was the unlawful deportation of a group of people at Stansted airport.

The protesters - known as the “Stansted 15” - are facing lengthy jail sentences for their non-violent intervention in March last year.

Amnesty is concerned that the serious charge of “endangering safety at aerodromes” may have been brought to discourage other activists from taking non-violent direct action in defence of human rights. The organisation has written to the Director of the Crown Prosecution Service and the Attorney General calling for this disproportionate charge to be dropped.

The trial is currently expected to last for approximately six weeks.

“We’re concerned the authorities are using a sledgehammer to crack a nut with this case.

“Public protest and non-violent direct action can often be a key means of defending human rights, particularly when victims have no way to make their voices heard and have been denied access to justice.

“Human rights defenders are currently coming under attack in many countries around the world, with those in power doing all they can to discourage people from taking injustice personally. The UK must not go down that path.”

Photo-call at 9am on Monday

Amnesty activists with ‘Stand Up for Human Rights Defenders’ placards will be outside Chelmsford Crown Court (3-5 New Street, Chelmsford CM1 1NT) at 9am on Monday 1 October for a brief photo-call.

Please note: Amnesty activists will not be making comment on the case outside the court, though the contents of this media advisory can be used in any news reporting of the trial.