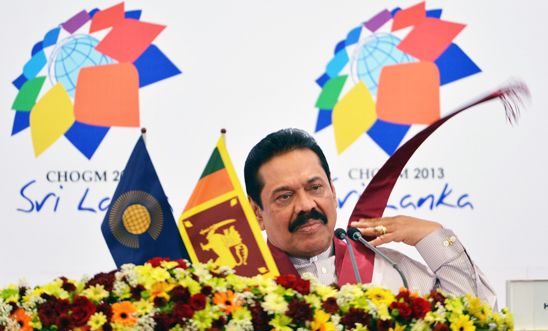 The international community must keep up pressure on the Sri Lankan government to address its human rights crisis, Amnesty International said as the Commonwealth Heads of Government Meeting (CHOGM) in Colombo draws to a close.

“Sri Lanka may well regret having hosted the Commonwealth summit which has proved a PR disaster for the government. Most of the focus has rightly been on the country’s appalling human rights record.

“The challenge for the international community is now to keep up the pressure on the Sri Lankan government. Those responsible for past violations, including war crimes, must be held accountable, and on-going human rights violations stopped irrespective of rank - victims and survivors must see justice done. The past week has provided clear examples of the government’s repressive tactics”

Backing the call already made by UN human rights chief Navi Pillay, Prime Minister David Cameron said that if no credible domestic investigations are carried out by March next year, there should be an international inquiry.

Prime Minister Navin Ramgoolam of Mauritius, who boycotted CHOGM over Sri Lanka’s human rights, stressed that Sri Lanka must cooperate with such an inquiry.

“The strong words by Mauritius, the UK and others have bolstered calls for an international investigation into credible war crimes allegations. But we need action, not just words. The upcoming UN Human Rights Council session in March can and must establish the international inquiry that is long overdue.”

The Commonwealth today confirmed Sri Lanka as the organisation’s Chair for the next two years. The country will also serve on the Commonwealth Ministerial Action Group (CMAG), the body charged with monitoring human rights in member states.

“By awarding Sri Lanka the chairmanship for the next two years and membership of the organisation’s human rights oversight body, the Commonwealth has confirmed its failure to address the country’s human rights crisis.

“It beggars belief that a country with Sri Lanka’s appalling human rights record can be accorded this honour.”