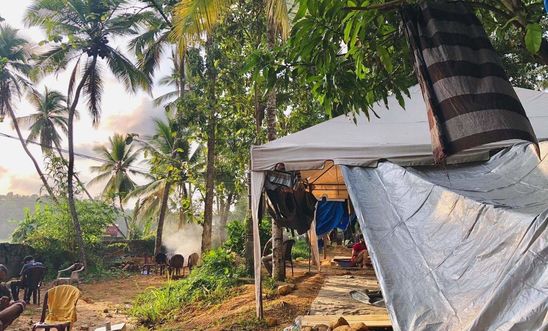 Refugees fear for their safety amid appalling conditions at overcrowded and unsanitary shelters.

The Sri Lankan government must ensure that the more than 1,100 refugees and asylum-seekers forced from their homes by violent mobs in the aftermath of the Easter Sunday massacre are immediately provided with adequate security, food, shelter and healthcare, Amnesty International said today.

Many are languishing in overcrowded community centres and a police station, as anti-Muslim violence rises in the country. They lack proper places to sleep, clean and adequate sanitation facilities, and access to medical attention to treat illnesses that have spread in the makeshift shelters.

Targeted by mobs who blame them for the Easter Sunday attacks that killed more than 250 people, the refugees and asylum-seekers – many belonging to persecuted religious minorities from Afghanistan, Iran and Pakistan – say they are reliving the horrors that forced them to originally flee their own countries.

“These are people who have been dispossessed twice now because of their backgrounds. They had hoped to find safety in Sri Lanka after fleeing the violence of bigoted mobs in their own countries.

“Now, they are faced with the same fears that forced them here, leaving them unable to leave their shelters where they languish in dire conditions.

“We are not talking about a large number of refugees and asylum-seekers by any means. It does not take much to provide them with the security they need and the dignity they deserve.

“The Sri Lankan government has a responsibility to ensure that these people have their dignity restored immediately. This could be a story Sri Lanka can be proud of. If they fail to act, however, this situation threatens to become a humanitarian tragedy that will shame Sri Lanka for years to come.”

The refugees and asylum-seekers include Ahmadi Muslims, Shi’as and Christians from Pakistan, Shi’a Hazaras from Afghanistan, as well as political refugees from Iran and Pakistan.

Attacks in the aftermath of the Easter Sunday massacre

The mood changed after Easter Sunday, following the attack on Negombo’s St Sebastian’s Church where more than 100 people were killed. Some refugees and asylum-seekers told Amnesty that a rumour spread in the Negombo area, claiming that Pakistanis were behind the bombings, unleashing violent mobs seeking reprisals.

Naseem John, 57, a Pakistani Catholic from Karachi, said: “There was a group of men who came, some of them carrying sticks with nails in them. Some of them were drunk.

“They said that we were Pakistanis and that we had to leave the area within two hours. We said that we are also Catholics, like the victims killed in the church. They said, ‘It doesn’t matter, you’re still Pakistani. You have to leave’.”

Some Ahmadi Muslim women said that they had to leave in a sudden panic and, out of fear, they were not even able to take their scarves and other religious clothing with them.

The families received messages from within the community telling them to head to police stations and places of worship. Numerous families said they struggled to find transport, with many taxi services refusing to take them – sometimes at the direct insistence of the mobs.

Nargis Alizada, a Shi’a Hazara refugee from Afghanistan, said: “When I had to leave my house in Negombo, I cried a lot.

“It reminded me of the harsh reality of our situation that we are neither safe in our country nor here. I feel vulnerable and insignificant.”

On 25 April, a mob of hundreds of people, including Buddhist monks, gathered outside one of the temporary shelters where the refugees and asylum-seekers had sought safety.

The mob shouted threats and threw stones, which landed in the grounds of the community centre and hit a building where many people had taken shelter.

Since Easter Sunday, many of the affected refugees and asylum-seekers are too afraid to venture beyond their temporary shelters, and feel they are no longer safe in Sri Lanka.

Habib-ur-Rehman, 35, a Pakistani asylum-seeker, said: “We feel safe here [in the police station], but are too fearful to go outside. The police have said they can protect us here, but not outside.”

The UN refugee agency has so far unsuccessfully attempted to relocate some of the refugees and asylum-seekers to other locations inside Sri Lanka. They have been turned away three times.

A bus took some of the group as far as Colombo, but the police did not allow them to get off. On another occasion, some refugees and asylum-seekers were invited to take shelter at a church, but were confronted by an angry mob that included Buddhist monks.

On 8 May, in the town of Ambalantota, there was a demonstration against the presence of refugees and asylum-seekers.

Nobil John, 27, a Pakistani Catholic from Karachi, said: “This used to be a peaceful country, it’s no longer that way. We want security. We can’t go back [to Pakistan], and we can’t stay here anymore. If [armed groups] can attack other people, who will defend us? We want to go anywhere where we can live with peace and dignity.”

In the temporary shelters, refugees and asylum-seekers are living in overcrowded and unsanitary conditions without reliable access to basic services. They all sleep on the hard floor, with a thin plastic sheet or bedsheet under them, with little space. Some sleep in the open, on wooden pallets.

At the police stations and community centres, every family speaks of at least one person who is ill. People are suffering from fever, infections, respiratory illnesses or diarrhoea, and, especially among older people, high blood pressure.

There are no adequate health facilities nearby, and the refugees and asylum-seekers cannot venture out by themselves. Medical officers visit the temporary shelter, albeit on an ad-hoc basis. One group of Pakistani men told Amnesty they faced hostility from staff at Negombo hospital.

One mother was forced to give birth at the temporary shelter she was staying at before medical support arrived. Other women desperately tried to assist with the delivery – but none of them were trained and did not have required medical supplies for childbirth assistance. There are at least 15 pregnant women among the refugees and asylum-seekers.

Women and men are forced to use the same one or two small bathrooms – comprising of a shower and a toilet – at the police station. There are no separate facilities.

Amnesty International is calling on the Sri Lankan government to provide effective security to refugees and asylum-seekers; relocate refugees and asylum-seekers for an interim period to temporary shelters where they are protected and where they can stay in safe and dignified living conditions; provide immediate medical care, food, sanitation, adequate temporary shelter and ensure that women and girls, especially pregnant women, have access to separate sanitation facilities and healthcare; and ensure that no refugees or asylum-seekers are forcibly returned to countries of origin or any other place where they would be at real risk of serious human rights violations, which would constitute a violation of the international legal principle of non-refoulement.

Amnesty is also calling on the international community to increase the number of refugees it resettles from Sri Lanka considering the current situation and expedite the resettlement process; and explore alternative pathways for the refugees and asylum-seekers to secure a future outside of Sri Lanka, including community sponsorship, study visas, medical visas, work permits, and emergency or humanitarian visas.