Sri Lanka: Escalating crackdown confirms 'the country should not have been allowed to host CHOGM in the first place' 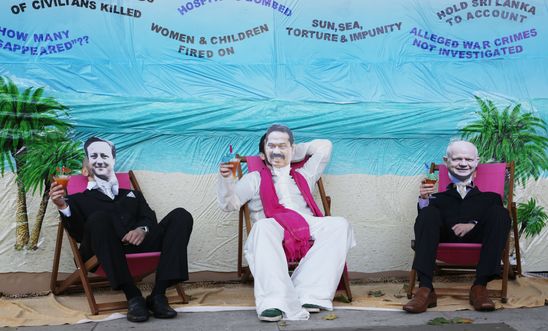 Commonwealth leaders must use their summit in Colombo this week to pressure the Sri Lankan authorities into ending an alarming crackdown on civil society in the country, Amnesty International said today.

This morning the Sri Lankan military blocked scores of family members of “disappeared” people from attending a human rights vigil in Colombo, the latest move to stifle freedom of expression and assembly ahead of the Commonwealth Heads of Government Meeting (CHOGM) this weekend.

Steve Crawshaw, Director of the Office of the Secretary General, in Colombo representing Amnesty International during CHOGM, said:

“This is a blatant attempt by the authorities to stifle people’s right to peaceful protest. It fits a familiar pattern in Sri Lanka, where the government has in recent years done everything in its power to silence dissent.

“It is notable that the Commonwealth has been shamefully silent throughout this, and has yet to condemn the human rights violations that are still so clearly business as usual for Sri Lanka.

“These developments have confirmed what Amnesty International has long argued. Given Sri Lanka’s atrocious human rights record and its refusal to address ongoing violations, the country should not have been allowed to host CHOGM in the first place.

“The Commonwealth and those attending the summit must use the coming days to highlight and condemn ongoing human rights violations in Sri Lanka. Under no circumstances should Sri Lanka be handed the chair of the organisation for the next two years.”

The family members of “disappeared” people were travelling by bus from Sri Lanka’s Tamil-majority northern province to attend the Samagi human rights festival in Colombo, an “alternative CHOGM” organised by human rights groups, when they were blocked by the army.

The Sri Lankan authorities have also taken measures to prevent public protests in Colombo during CHOGM. Meanwhile, the government has intensified a crackdown on critics and dissenting voices in the build-up to the summit, with opposition activists, journalists and human rights defenders among those who have been harassed or threatened.

International human rights experts have also been barred from entering the country. The International Bar Association Human Rights Institute had to cancel a planned meeting this week after its representatives and the UN Special Rapporteur on the Independence of Judges and Lawyers were denied entry to the country.

Background
During a recent visit to the country, UN High Commissioner for Human Rights Navi PIllay expressed dismay that the surveillance and harassment of members of Sri Lankan civil society "appears to be getting worse". Local human rights groups have documented a range of other measures taken by the government against civil society ahead of CHOGM. These include the closing of all universities across the country, restrictions on journalists’ freedom of movement; banning a range of planned civil society meetings; and threatening to deport visiting parliamentarians, including from Australia and New Zeeland, for engaging with domestic civil society.

Navi Pillay stressed that many who met or wanted to meet her had been threatened by the security forces, and that critical voices in Sri Lanka are “quite often attacked or even permanently silenced”.

As the Foreign Secretary William Hague and Prime Minister David Cameron will both be meeting with victims and human rights groups whilst they are in the country, Amnesty has been pushing for the UK to ensure that the individuals they meet do not face similar reprisals and to implement measures which guarantee their ongoing safety both during and after CHOGM. Amnesty is yet to see a plan from the UK and its embassy which would ensure the protection of the people they meet with.