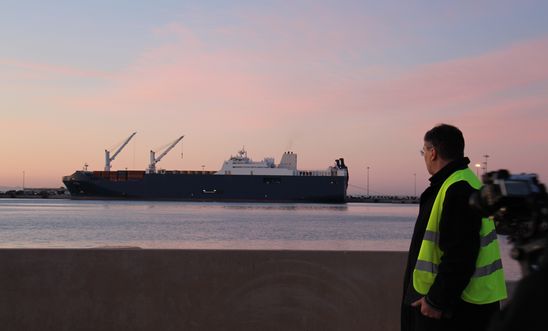 ‘If officials allow this operation, they risk being complicit in the commission of war crimes’ - Alberto Estévez

A Saudi Arabian cargo ship has been allowed to enter the Spanish port of Sagunto in Valencia, despite Amnesty International and other NGOs calling on the Spanish authorities to block the vessel’s entry because of fears it may be carrying weapons bound for the conflict in Yemen.

Since the war in Yemen began, the Saudi state-owned “Bahri Abha” cargo ship is known to have transported more than £120m of US-manufactured arms to Saudi Arabia.

Members of the Spanish Control Arms campaign - which includes Amnesty, FundiPau, Greenpeace and Oxfam Intermón - picketed at the port earlier today, protesting at the arrival of the ship and demanding that the Spanish Government prohibit the transit and loading in Spain of weapons likely to be used to commit war crimes in Yemen.

The Bahri Abha vessel visited several ports on the east coast of the USA before announcing a sudden route change to Sagunto on 26 November. It is unknown if it is carrying arms on its current voyage, but campaigners say it is highly likely based on its recent history. According to bills of lading data analysed by Amnesty, since the war in Yemen began in 2015 the ship has transferred some £120m of arms on eight voyages from the USA to Saudi Arabia, almost a quarter of this during 2019. The majority has been military aircraft components.

In addition, NGOs fear the ship may also load new weapons in Spain. This was the case with another ship from the same fleet, the “Bahri Yanbu”, which loaded weapons destined for the UAE in the Spanish city of Santander in May.

According to information Amnesty Spain has received from the Spanish Government, in Sagunto the ship is due to load containers to be sent to Abu Dhabi and Alexandria in Egypt. The Spanish authorities have failed to reveal either the content of the containers or the cargo being carried from the USA.

The Saudi and Emirati-led Coalition’s air war in Yemen has killed and injured thousands of civilians, including in attacks that have violated international humanitarian law.

“The Spanish Government must intervene to ensure this Saudi Arabian ship is not transporting more deadly cargo that could be used to commit further atrocities in Yemen.

“If it is carrying more arms to be used to commit violations of international humanitarian law in Yemen, its transit through Spanish territory violates international law.

“We have requested information from the Government regarding what this ship is doing in Spanish territory, but we haven’t received a response.

“If officials allow this operation, they risk being complicit in the commission of war crimes.

“The Government must prevent this ship from loading arms in Sagunto or transporting arms to Saudi Arabia that would likely be used in atrocities in Yemen.”

The armed conflict in Yemen began in March 2015 after a multi-country coalition led by Saudi Arabia and the United Arab Emirates intervened at the request of President Hadi, with the declared aim of restoring the internationally-recognised government to power after the Huthi armed group took over the capital Sana’a in early 2015.

To date, more than 233,000 Yemenis have been killed as a result of the fighting or the humanitarian crisis - some 14.3 million people are at risk of famine, and 24 million (out of a population of 29 million) need humanitarian assistance to survive.

The UN, as well as international and Yemeni NGOs, have documented dozens of serious violations, including war crimes, by all parties to the conflict, including direct attacks on civilians, indiscriminate and disproportionate attacks, arbitrary detention, enforced disappearances, and torture and other ill-treatment. In the first four years of the conflict, Amnesty documented at least 41 airstrikes by the Saudi coalition that allegedly violated international humanitarian law, many of which could constitute war crimes. These attacks alone resulted in 512 civilian deaths and 433 civilian injuries.

Spain ratified the Arms Trade Treaty in 2014, and has a legal obligation to prohibit the transfer of conventional arms and ammunition when they would be used to commit genocide, crimes against humanity, grave breaches of the Geneva Conventions, attacks directed against civilian objects, or other war crimes. State parties to the treaty are also committed to taking “appropriate measures” to regulate the transit or trans-shipment of conventional arms through their territory.

In response to public pressure, several countries - including the Netherlands, Belgium, Greece and Germany - have suspended all or part of their arms sales to Saudi Arabia, the UAE and other coalition members. Following last year’s murder of Saudi Arabian journalist Jamal Khashoggi, several more European countries announced the suspension of arms transfers to Saudi Arabia, including Norway, Finland and Denmark.

In the UK, the Court of Appeal ruled in June that the UK Government’s decision to continue licensing exports of military equipment to Saudi Arabia was unlawful, following a judicial review brought by Campaign Against the Arms Trade, a legal challenge which was joined by Amnesty, Human Rights Watch and Rights Watch UK.