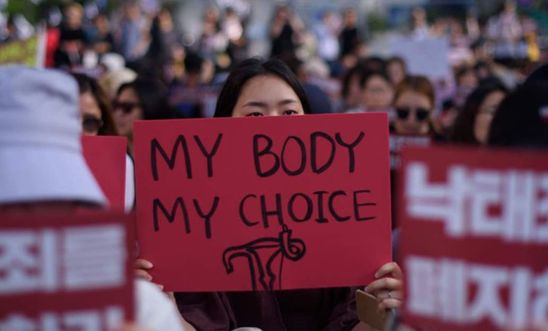 Responding to a ruling by South Korea’s Constitutional Court that orders the government to decriminalise abortion in the country and reform its highly restrictive abortion laws by the end of 2020, Roseann Rife, Amnesty International’s East Asia Research Director commented:

“Today’s ruling is a major step forward for the human rights of women and girls in South Korea.

“The country’s draconian laws have resulted in discrimination and stigmatisation for generations of women and girls by forcing them to undergo clandestine and unsafe abortions. The Constitutional Court has sent a clear message this must change, and in future the human rights of women and girls must be fully protected and respected.

“We urge the government to swiftly reform the Criminal Act and ensure access to safe and legal abortion services. The highly restrictive and punitive laws must change so that the health of women, girls and others who can become pregnant is no longer put at risk for fear they or the medical professionals that help them could be punished.

“Abortions will always happen, regardless of the law. This judgment means that they should be carried out safely and legally, and that women and girls are treated with compassion and respect for their human rights and their reproductive autonomy. Their dignity must be front and centre in any new legal framework on abortion.”

Today’s judgment by the Constitutional Court followed a challenge by a doctor who has been prosecuted for carrying out abortions. The ruling requires that the National Assembly must reform the law by 31 December 2020.

The current law criminalises abortions, and only allows for exceptions in cases of rape, incest, severe genetic disorders, specific diseases or if a woman’s or girl’s health is endangered by the pregnancy. In these limited instances, abortions must be performed within the first 24 weeks of pregnancy and are subject to spousal consent.

Women who terminate a pregnancy can face fines of up to 2 million won (£1,414) or one year in jail. Medical professionals who assist with abortions can face prison terms of up to two years if convicted.

Today’s ruling puts the spotlight on the situation in the UK, where women in Northern Ireland continue to be subject to one of the most restrictive abortion laws in the world – only able to access the service when the woman’s life is at risk and punishable by life in prison.

“In Northern Ireland we had everything crossed for women in South Korea. We’re fighting the same fight, and this historic win brings hope to us here.

“Today’s judgment is a stark reminder of the UK Government’s neglect of women in Northern Ireland who are isolated and suffering under a cruel abortion regime where prosecutions are a reality. The UK is slipping further and further behind on women’s rights.

“This ruling must jolt the government into action on reforming Northern Ireland’s near total abortion ban.”