South Africa: Suspend those behind the Marikana killings and subsequent cover-up 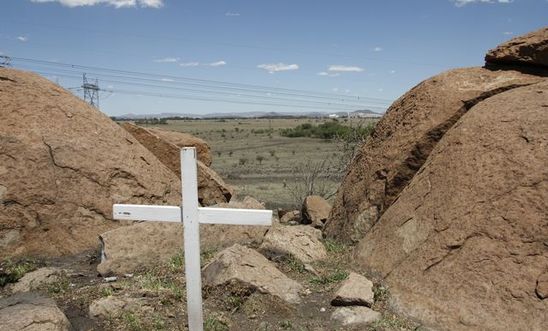 Marikana, scene of the killings of 34 people on 16 August 2012 © Amnesty International

“It is so painful when there is so much uncertainty about who will be held accountable when our husbands died like dogs.” – relative of Marikana miners killed in 2012

All members of the South African Police Service implicated in the Marikana killings and subsequent cover-up must be suspended immediately pending the outcome of further investigations, said Amnesty International today, ahead of the third anniversary of the unlawful and fatal police shootings of 34 striking miners.

As a first step, President Zuma must initiate the suspension of the National Commissioner of Police, Riah Phiyega.

Three years on, not a single member of the police authorities has been suspended or held to account.

“With police authorities closing ranks in the face of strong findings against them in the Farlam Commission report, it is vital that President Zuma shows strong leadership and takes action against those at the top of the police service.

“Anything less will result in the continued lack of accountability for the unlawful killings by police on 16 August 2012 at Marikana. The ongoing denial of justice for the victims and their families is unacceptable.

“Three years on, the aftershocks of Marikana can still be felt in the grief of families of all victims, the suffering of those injured and the thirst of ordinary South Africans for accountability.

“President Jacob Zuma must act now to ensure all of the Farlam Commission report’s key recommendations are implemented. The perpetrators of all the killings which occurred in that terrible week must be brought to justice.”

The police operation on 16 August 2012 was triggered by the decision the night before by senior police officials to forcibly disarm and disperse the strikers despite foreseeing bloodshed.

The report of the Marikana Commission of Inquiry (the Farlam Commission), released earlier in June 2015, described this decision as reckless and inexplicable and as the “decisive cause” of the deaths.

From the start, the police systematically attempted to conceal and falsify evidence and to otherwise mislead the Farlam Commission. The report was highly critical of senior leadership within the South Africa Police Service, including the National Commissioner, for giving evasive testimony and for their involvement in the destruction, concealment and fabrication of evidence.

One of the Farlam Commission’s recommendations was a judicially-led board of inquiry into the National Commissioner’s fitness to hold office. President Zuma should use his authority to establish this urgently and to suspend the National Commissioner pending the outcome of this inquiry. This should in turn pave the way for the suspension of other police officials who are implicated and facilitate other disciplinary and investigation processes as recommended by the Farlam Commission.

Many families were affected by the killings on 16 August 2012 and by the unlawful deaths at the hands of the police and the strikers in the preceding days. Grief among families of the victims remains palpable and as one family member told Amnesty: “It is so painful when there is so much uncertainty about who will be held accountable when our husbands died like dogs.”

The police operation in Marikana on 16 August 2012 was intended to disarm, disperse and arrest those taking part in a strike and gathering deemed illegal at Lonmin’s Marikana mine.

Thirty-four miners were killed when the police opened fire and more than 70 others sustained serious injuries.

The command decision taken on the night of 15 August to forcibly disarm the protesters was unrelated to any increased threat posed by the protesters at the specific time. The resulting further decision to deploy large numbers of police units with firearms and live ammunition was not triggered by any threat to life or the intention to protect or save any life.

As such these actions were unlawful under South African domestic law obliging police officers to act within a framework of minimum force, and under international law and standards, in particular the obligation to respect and protect life. The United Nations Basic Principles on the Use of Force and Firearms allows for the use of firearms only in defense against imminent threat of death or serious injury and only when less extreme methods are insufficient.