South Africa: still no justice for victims of Marikana mine killings, five years on 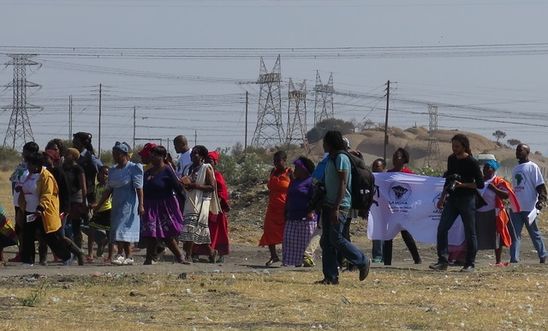 “There is nothing happening to the people who shot us. This is the work of the government” – Marikana tragedy survivor

Victims of the bloody tragedy at Marikana, in which 34 protesters were killed and at least 70 injured by members of the South African Police Service during a mining strike, are still awaiting justice five years on, Amnesty International said today.

Amnesty is calling on the South African authorities to ensure that those suspected of criminal responsibility in relation to the killings on 16 August 2012, are brought to trial, and that the victims and their families receive reparations, including adequate compensation.

“The tragedy of the Marikana killings is compounded by the shocking fact that no-one responsible for the bloodshed has yet been held accountable.

“If the South African government wants to demonstrate that it is committed to truth and human rights, it needs to ensure that the wheels of justice start turning far faster than they have done over the past five years.”

In July 2017, Amnesty met with victims of the shootings and their families at the Nkaneng informal settlement near Lonmin’s Roland shaft, where they still live in inadequate housing and squalid conditions.

In the 2016 report, ‘Smoke and Mirrors: Lonmin’s failure to address housing conditions at Marikana’, Amnesty revealed how the company that owns the Marikana mine, UK-based Lonmin Plc, had committed to constructing 5,500 houses for workers by 2011 under its 2006 Social and Labour Plan.

The appalling housing conditions faced by Lonmin employees, along with grievances over low pay, were among the main reasons behind the strike.

Many of the individuals Amnesty met last month expressed their anger and disappointment that so little had changed in the five years since the killings.

Former Lonmin employee Johannes Khwedu*, whose childhood friend was killed at Marikana, said he was shocked there had been no action against the police who shot the protesting miners in front of international television cameras.

“How can they kill so many people without consequences? The government must arrest those who killed them,” he told Amnesty.

Justin Kolobe*, a former rock drill operator at Lonmin mine who survived the shooting but was permanently paralysed, is still waiting for both justice and reparation. He blames the South African government for the lack of progress.

“There is nothing happening to the people who shot us. This is the work of the government. If they don’t want anything to happen, it won’t happen. Forget it,” he said.

Sarafina Jobe* lost her husband, a Marikana employee, in the shootings and is struggling to feed and support her family without the R2850 (£162) he used to send home each month.

She told Amnesty: “I feel a real pain sometimes when I think that he is gone. My heart beats quickly, my chest hurts and I get a headache when I think about it at night. We want compensation, and we want to know how our husbands died, who killed them and for what reason. That is the only way to recognise that we lost a soul, and that he cannot ever be replaced.”

The men were employees of Lonmin, and had been engaged in strike and protest action over pay and conditions at the mine.

Independent and state forensic pathologists who undertook the post mortems on the 34 men killed found that 30 of them died because of injuries caused by police high-velocity ammunition from R5 assault rifles. The fatal injuries in three other cases were caused by handgun ammunition and in one case by shotgun ammunition. The killings came amid rising tension in the days leading up to the strike.

In June 2015, the Farlam Commission - which was set up by the South African government to look into the circumstances of the killings - recommended a full investigation under the Director of Public Prosecutions to ascertain the criminal liability of members of the South Africa Police Service who were involved in the events at Marikana.

In December 2016, President Jacob Zuma announced that criminal charges would be brought against senior police officers involved in the killings.

In March 2017, police watchdog The Independent Police Investigative Directorate (IPID) idenitifed 72 police officers for prosecution in relation to their roles in the Marikana killings. In May, the dockets were submitted to the National Prosecuting Authority. To date, however, no police officers involved have been prosecuted.

In August 2017, the National Prosecuting Authority postponed indefinitely the trial of 17 strike leaders linked to the killings that took place between 12-14 August 2012.