Somalia: three victims of US airstrike were farmers not Al-Shabaab - new investigation 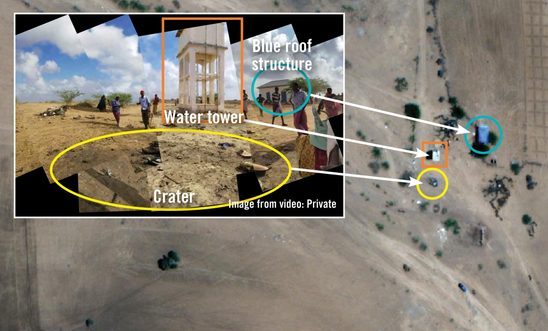 US has labelled men ‘Al-Shabaab terrorists’ without providing evidence

Killings part of an airstrike surge under Trump, which has seen at least 131 US drone and manned aircraft attacks in Somalia

An investigation by Amnesty International has revealed that three men killed in a US military airstrike in Somalia in March after being targeted as “Al-Shabaab terrorists” were in fact civilian farmers with no links to the armed group.

Amnesty believes the attack may have violated international humanitarian law - and is calling on the US government to carry out a full investigation and to set up a system for Somalians to be able to report civilian casualties in US attacks.

The airstrike, which took place on 18 March near the hamlet of Abdow Dibile in Somalia’s Lower Shabelle region, destroyed a Toyota Surf SUV in which three farmers were returning from their fields to their homes in Mogadishu and the towns of Leego and Yaaq Bariwayne.

Two of vehicle’s occupants were killed instantly - the driver, Abdiqadir Nur Ibrahim (46), and one of the two passengers, Ibrahim Mohamed Hirey (30). A third man, Abdiqadir’s half-brother, Mahad Nur Ibrahim (46), was badly burnt and died in hospital in Mogadishu nearly three weeks later. Medical records seen by Amnesty show he died of cardiac arrest after suffering sepsis and more than 50% burns. Between them, the three men the men left behind 19 children.

All adamant not Al-Shabaab

The US military’s Africa Command (AFRICOM)’s has insisted its attack killed three Al-Shabaab members, but Amnesty’s research casts serious doubt on this claim. Amnesty interviewed 11 people in the attack’s aftermath, including family members, those who visited the scene, and staff at Hormuud Telecom, where one of the men also worked. Amnesty also assessed media reports, US government statements, vehicle purchase records, official IDs, medical records, and videos and photographic evidence of the scene of the attack and the men’s injuries. Everyone Amnesty spoke to was adamant that none of the men was an Al-Shabaab member. Also, Al-Shabaab did not prevent relatives from collecting and burying the men’s remains, which it generally does when its own fighters are killed.

A close friend of Abdiqadir Nur Ibrahim who visited the scene the morning after the attack, said:

“Abdiqadir’s body was completely destroyed but I recognised … his face that was burnt … I also recognised his watch which was hanging from the front side of the car.”

Similarly, a woman who visited the scene told Amnesty that Abdiqadir Nur Ibrahim and Ibrahim Mohamed Hirey “were both burnt beyond recognition and cut into pieces.”

“It’s bad enough that the US Africa Command appears not to know who its airstrikes are actually killing and maiming in its secretive war in Somalia.

“But it’s reprehensible that AFRICOM offers no way for those affected to contact it and has failed to reach out to the families of victims after its version of events was called into question in this case.

“This is just one of many cases of the US military wantonly tarnishing large parts of the Somali population with the ‘terrorist’ label. No thought is given to the civilian victims or the plight of their grieving families left behind.”

“The US government must ensure thorough, impartial investigations into all credible allegations of civilian casualties are carried out, with accountability for those responsible for violations and reparation made to the victims and survivors. It can start by establishing an accessible mechanism for Somalis to safely report civilian casualties of US military operations.”

The US military’s Africa Command (AFRICOM)’s reporting on the 18 March airstrike and its responses to Amnesty raise serious questions about its intelligence-gathering and its targeting of claimed “affiliates” of Al-Shabaab.

An AFRICOM press release on 19 March claimed - without citing evidence - that the three victims were “terrorists”. It also said AFRICOM “was aware of reports alleging civilian casualties,” and would review any relevant information about the incident. In May, a journalist for Foreign Policy provided AFRICOM with evidence that Ibrahim Mohamed Hirey was a civilian and passed on contact information for his relatives. To date, AFRICOM has not made contact with them. Meanwhile, there is no evidence either that AFRICOM attempted to engage with the injured man who lay in hospital in Mogadishu.

Amnesty shared further information about the case with AFRICOM in August, but AFRICOM has still refused to back down on its “terrorists” claim, stating:

“This airstrike was conducted against lower level al-Shabaab members to decrease morale ahead of Somali Army operations … Specifically, information gathered before and after the strike indicated that all individuals injured or killed were members or affiliates of al-Shabaab”.

Again, AFRICOM has failed to provide evidence for this claim or indicate that it will be investigating further.

On 20 March this year, Amnesty’s published strong evidence countering AFRICOM’s repeated claims that its operations in Somalia had resulted in “zero civilian casualties”. As a result, on 5 April AFRICOM made its first ever admission regarding civilian casualties in Somalia, saying Amnesty’s work had prompted it to review its records. However, six months later AFRICOM has still not provided an update on the status or outcome of this review.

US airstrikes in Somalia have surged since early 2017, after President Trump signed an executive order declaring the south of the country an “area of active hostilities”. Since then, AFRICOM has used drones and manned aircraft to carry out at least 131 attacks in the country. The attack in Abdow Dibile is one of 50 he US military has acknowledged in Somalia so far this year (up to mid-September). This easily outstrips the 47 airstrikes in 2018, and the 34 carried out in the last nine months of 2017.

To date, Amnesty has documented six cases where US airstrikes are believed to have resulted in civilian casualties - killing a total of 17 people and wounding eight.