Singapore: Execution of man with learning disability is a 'disgraceful act' by the government 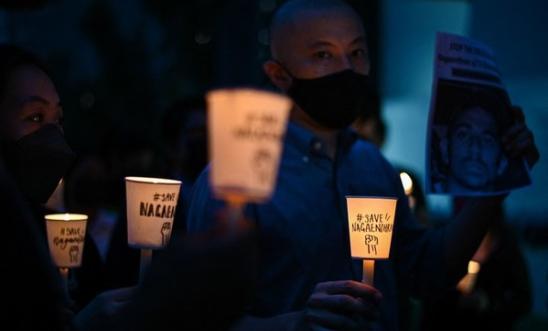 “The execution of Nagaenthran is a disgraceful act by the Singapore government – ruthlessly carried out despite extensive protests in Singapore and Malaysia and an outcry across the world.

“Nagaenthran’s hanging highlights the deep flaws of the death penalty in Singapore and the horror of its continued use. He was executed after he was sentenced to the mandatory death penalty for drug trafficking, amid concerns about his mental health state and despite having a diagnosed intellectual disability – in violation of international law and standards.

“Having carried out two executions in the space of a month, and with another man scheduled to be hanged on Friday, Singapore’s government is pursuing a cruel path that is severely at odds with the global trend towards abolition of the death penalty.

“There is no evidence to back up the government’s claim that the punishment is the answer to tackling drug-related problems in the country.

“The Singapore authorities must immediately stop the current wave of executions and urgently review legislation on the use of the death penalty, with a view towards abolition, in light of this shocking case.”

Nagaenthran K Dharmalingam was convicted and sentenced to the mandatory death penalty on 22 November 2010 for importing into Singapore 42.72 grams of diamorphine (heroin) in April 2009. His conviction and death sentence were upheld in July 2011. International law and standards prohibit the imposition of mandatory death sentences as these deny judges the possibility of taking into account the mitigating circumstances in the case. Moreover, international law and standards require that the imposition of the death penalty be restricted to the “most serious crimes” involving intentional killing.

Medical experts who assessed Nagaenthran in 2013, 2016 and 2017 found that he has borderline functioning intelligence and concurrent cognitive deficits, which “may have contributed toward his misdirected loyalty and poor assessment of the risks in agreeing to carry out the offence”. The Court of Appeal dismissed the concern, stating that “[h]is alleged deficiency in assessing risks might have made him more prone to engage in risky behaviour; that, however, does not in any way diminish his culpability.” The treaty bodies for the Convention of Rights of Persons with Disabilities (CRPD), to which Singapore is a party to, prohibits the imposition of the death penalty on people whose mental and intellectual disabilities have impeded their effective defence. Nagaenthran’s other motions and appeals were subsequently rejected including a last-minute appeal by his mother who filed a criminal motion on Tuesday, in the absence of a lawyer.

Nagaenthran’s case resulted in unprecedented protests in Malaysia and Singapore days before his execution. On 25 April, hundreds of demonstrators gathered in Singapore’s only space for public protest, Hong Lim Park, for a three-hour vigil. On 26 April, a demonstration outside the Singapore High Commission in Kuala Lumpur also drew large numbers before it was shut down by police. Nagaenthran’s case has received widespread attention internationally, including from the UN Office of the High Commissioner for Human Rights and other UN experts.

Another execution set this week

Malaysian man Datchinamurthy Kataiah is set to be executed on 29 April for drug-related offences, despite a legal challenge he has pending at a Singapore court, for which there is a hearing in May. International safeguards guaranteeing protections of the rights of those facing the death penalty state that executions may not be carried out pending any appeal or other recourse procedure.

Singapore commonly cites the death penalty as a way to deter people from committing crime and solving problems associated with drugs. This claim has been repeatedly discredited, and there is no evidence that the death penalty is any more effective in reducing crime than life imprisonment.  Punitive drug policies mandating harsh punishments have been shown to harm, rather than protect people from problems caused by drugs.

Amnesty opposes the death penalty in all circumstances as a violation of the right to life and the ultimate cruel, inhuman, and degrading punishment.