Singapore: Amnesty calls for an end to executions as fifth person hanged in under four months 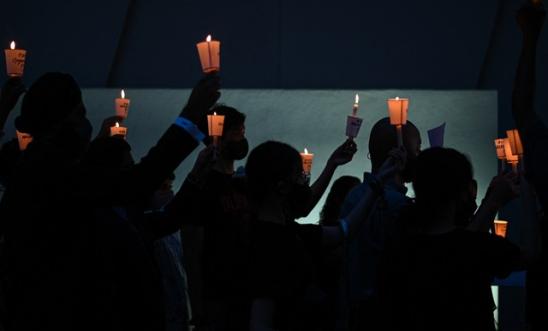 A candlelight vigil against the recent execution in Singapore of Nagaenthran K. Dharmalingam in April this year. © AFP via Getty Images

This is the fifth execution the country has carried out this year after a pause of over 2 years during the pandemic.

‘This relentless wave of hangings must stop immediately.’ - Chiara Sangorgio

“Five people have been hanged this year in Singapore, in a period of less than four months. This relentless wave of hangings must stop immediately.

“The use of the death penalty in Singapore, including as mandatory punishment for drug-related offences, violates international human rights law and standards.

“Everyone executed in Singapore in 2022 has been sentenced to the mandatory death penalty for drug-related offenses. Rather than having a unique deterrent effect on crime, these executions only show the utter disregard the Singaporean authorities have for human rights and the right to life.

“We call on governments, the United Nations Office on Drugs and Crime, and the International Narcotics Control Board to increase pressure on Singapore so that international safeguards on the death penalty are respected and drug control policies are rooted in the promotion and protection of human rights. Singapore’s highly punitive approach does neither.”

Singapore national Nazeri was sentenced to the mandatory death penalty in 2017, after being found guilty of possession of 33.39 grams of diamorphine (heroin) for the purposes of trafficking in 2012.

International law and standards prohibit the imposition of mandatory death sentences and require that the use of the death penalty be restricted to the “most serious crimes” or crimes of extreme gravity involving intentional killing.

Singapore has carried out five executions this year, all of people convicted of drug offences, after a pause of over 2 years during the pandemic. Going against a worldwide trend towards abolishing the death penalty, Singapore is just one of four countries known to have executed people for drug-related offenses in recent years.

Both the United Nations Office on Drugs and Crime (UNODC) and the International Narcotics Control Board (INCB) – the UN bodies tasked with crime prevention and drug policy – have condemned the use of the death penalty for drug-related offences and have urged governments to move towards abolition.

Amnesty International opposes the death penalty in all cases without exception. As of today, 110 countries have abolished the death penalty for all crimes and more than two-thirds are abolitionist in law or practice.