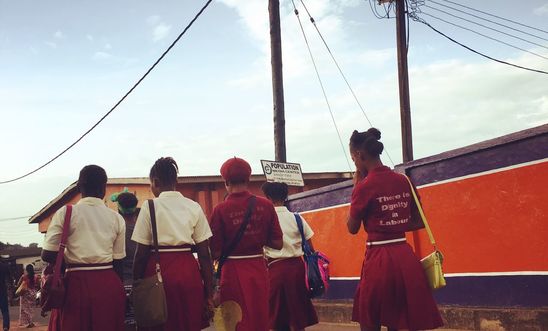 ‘In school they do not really teach us about family planning. They think we are too young, or it is bad or that it will encourage you to have sex.’

Sierra Leone must lift a deeply discriminatory ban on visibly pregnant girls attending school and taking exams, which continues to entrench gender inequality in the country which is putting thousands of teenage girls’ futures at risk, Amnesty International said today, a year on from a major report on the issue.

The ban was declared official government policy in April last year, shortly before schools re-opened following the country’s Ebola crisis. More than a year and a half later Amnesty is concerned that the ban is still in place, despite national and international criticism.

Amnesty spoke to 68 girls and young women aged between 15 and 20 who were either pregnant or had given birth recently in the Western Urban and Western Rural areas of Sierra Leone. Amnestsy also spoke to 26 national and international teachers, government officials and members of Sierra Leonean civil society to assess the impact of the ban.

The majority of girls interviewed had become pregnant during the Ebola outbreak, when there was an increase in teenage pregnancy, accompanied by a spike in sexual violence. One of the many negative consequences of the Ebola crisis was that it led to an increase in exploitative and abusive relationships.

“The prohibition on visibly pregnant girls attending mainstream schools and taking exams is hopelessly misguided, and is doing nothing to address the root causes of Sierra Leone’s high teenage pregnancy rate, which surged during the devastating Ebola crisis, and remains high despite this ban.

“Rather than humiliating and excluding teenage girls, Sierra Leone’s authorities should focus on increasing sexual and reproductive health information in schools, and protecting girls from sexual violence and abusive relationships. Unless these issues are addressed the cycle of unwanted early pregnancy will continue for generations to come.”

The practice of excluding pregnant girls from mainstream education and sitting exams has been a common practice in Sierra Leone for over a decade; however the official declaration of the ban in April 2015 turned an informal, sporadic practice into government policy, formalising and exacerbating the issue. More than ten years ago, after the end of the country’s civil war, the Truth and Reconciliation Commission made a firm recommendation that the practice of expelling girls who become pregnant from educational institutions is discriminatory and archaic.

Impact of the ban on pregnant girls
Most girls said the policy had left them feeling abandoned and discouraged at not being able to go to school. They described their frustration at being unable to sit exams for which they had studied hard. One girl told our researchers: “I would have been able to do the exam. I was frequently with my books. Even if you are pregnant, if you have been studying you will be able to do the exam.”

Girls also spoke about their frustration at having to repeat the year after they give birth as they have missed out on the opportunity to sit the exam when pregnant: “I have to repeat the year again. I feel bad as I see my friends moving forward to the next year,” a 17-year-old girl told Amnesty.

Stigma surrounding teenage pregnancy in Sierra Leone means that girls are made to feel ashamed for being pregnant and sometimes ostracised, or even abused, by their families and teachers. One girl Amnesty spoke to said she had voluntarily dropped out of school after seeing how her classmates were treated in the past: “One teacher announced … that the girl was pregnant in front of the whole school, took her bag away (she was protecting her stomach) and beat her with a cane.”

Special schools for pregnant girls
In May last year, in response to international and national pressure, Sierra Leone’s President Ernest Bai Koroma announced the establishment of an alternative “bridging” education system that would allow pregnant girls to continue going to school, but in different premises or at different times to their peers.  Despite this parallel system providing the girls with access to a limited form of education, President Koroma, in his Women’s Day address this March, appeared to confirm that it was based in part on negative stereotypes about pregnant girls when he said, ‘They will continue to receive formal education without allowing them to mingle in the same class with other schoolgirls. Let's go back to the basics and protect our values and culture.’

Ministry of Education officials told Amnesty that 14,500 girls initially registered for the scheme and that around 5000 had been reintegrated into mainstream school after giving birth. Classes were held three times a week for around two to three hours a day. The learning curriculum used in the scheme differed to that of mainstream schools and focused only on core subjects. Girls were also provided with health information and services, such as family planning.

Most of the girls Amnesty spoke to had positive feedback about the bridging system. A few girls said they preferred it to their normal school due to the stigma they faced.  One girl told Amnesty: “I was ashamed, in the normal school everybody would had laughed at me.”

However, several girls stated that they would have preferred to stay on in their normal school if they had a choice.

“[They] only taught us maths and English – but I was learning commercial studies in school and they did not teach us that,” one girl told Amnesty. Another girl said, “I would choose to go to my school if I had a choice as the school would give me results [exam grades]. When I give birth, I will continue at my own school and the learning centre is only for when I am pregnant.”

The bridging scheme ended in August 2016 but alternative classes for pregnant girls will continue under a new scheme, run by the Ministry of Education with support from UNICEF and the UK government, which will have a broader focus on girls who have dropped out of school for a variety of reasons as well as interventions to help keep girls in school. The new scheme will run for 17 months from this month.

International and national experts have welcomed the continued focus on girls’ education through this programme. However, concern remains about the lack of choice for pregnant girls due to the ban and their inability to sit exams which is contrary to Sierra Leone’s legal obligations to provide equal access to quality education for all children.

Limited access to sexual and reproductive health information
Special schools for pregnant girls are not the solution to addressing Sierra Leone’s high teenage pregnancy rate. Despite recommendations from Amnesty, the Child Rights Committee and national organisations, sexual and reproductive health information is still not part of the formal school curriculum. Most girls told Amnesty that they did not know about family planning and had little or no sex education before becoming pregnant.

One girl told our researchers “In school they do not really teach us about family planning. They think we are too young, or it is bad or that it will encourage you to have sex.”

Girls also had a lot of fear and misinformation about family planning.

Challenges to go back to mainstream school
Girls who become pregnant can face complex, intersecting barriers to continuing their education. Beyond the pregnancy ban, school fees were also a major concern for the majority of girls Amnesty International spoke to. In a country where 72% of the population lives in extreme poverty, these fees, and the cost of having a child, can be crippling. In addition, the stigma around teenage pregnancy means that many families withdraw their financial support which makes it very difficult for many girls to return to mainstream education even after their babies are born.  As one girl told Amnesty: “I can’t go back to my school as I can’t pay the fees. I am trying to do business and going to a private lesson. I don’t have anyone to help me.”

“Unless barriers to education are removed, Sierra Leone’s government is badly letting down its girls and putting their futures at risk. In line with its international obligations the government should take concrete steps to progressively ensure access to education for all girls – including subsidies for girls who require them – as part of its education strategy.

“Eradicating the stigma surrounding pregnant girls is also key. Sierra Leone has made great efforts to tackle stigma for Ebola survivors, and it should ensure that teenagers in highly vulnerable situations are protected and supported by their teachers, families and their communities; rather than shamed and blamed.”

Background
In November last year, Amnesty estimated that up to 10,000 girls were affected by the ban on visibly pregnant girls attending school and sitting exams. Various studies have reported there was an increase in teenage pregnancy during the Ebola outbreak. A study this year by the Secure Livelihoods Consortium stated that United Nations Population Fund surveys indicate 18,119 teenage girls became pregnant during the Ebola outbreak.

Even before Ebola broke out in late 2013, Sierra Leone had one of the highest teenage pregnancy rates in the world, with 28% of girls aged 15-19 years pregnant or having already given birth at least once.