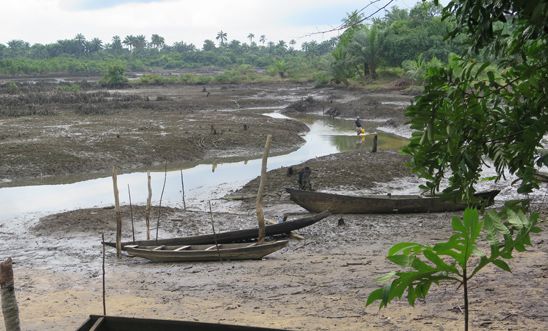 Claims by oil giant Shell that it has cleaned up heavily-polluted areas of the Niger Delta in Nigeria are blatantly false, Amnesty International and the Centre for Environment, Human Rights and Development (CEHRD) said in a new report published today (3 November).

The Niger Delta is the biggest oil-producing region in Africa and the 38-page report, Clean it up: Shell's false claims about oil spills in the Niger Delta, reveals that there is still contamination at four oil spill sites that Shell said it had cleaned up years ago.

At one of the locations, Shell’s Bomu Well 11, researchers found blackened soil and layers of oil on the water, 45 years after an oil spill took place - even though Shell claims to have cleaned it up twice, in 1975 and 2012. At other sites, certified as cleaned by the Nigerian regulator, researchers found soil and water contaminated by oil close to where people lived and farmed.

Amnesty’s report also documents the failure of the Nigerian government to regulate the oil industry. Its watchdog, the National Oil Spill Detection and Response Agency (NOSDRA) is under-resourced and has been certifying as clean areas that are visibly polluted with crude oil.

The report is being published to mark the 20th anniversary of the execution, on 10 November, of the environmental activist and writer, Ken Saro-Wiwa, who campaigned tirelessly against the pollution caused by the oil industry in the Niger Delta.

“Anyone who visits these spill sites can see and smell for themselves how the pollution has spread across the land.

“Shell says theft is to blame for oil spills, but even if that were true it would not excuse the company’s consistent failure to clean up oil pollution. Shell’s blame-game can no longer deflect attention from its broken promises and neglected infrastructure.

“As long as oil companies fail to live up to their commitments, the Niger Delta will remain a cautionary tale of communities promised prosperity, but left with blighted, devastated lands.”

Ken Saro-Wiwa was a member of the Ogoni people, an ethnic minority in Nigeria whose homeland, Ogoniland in the Niger Delta, was the scene of crude oil extraction by Shell. Saro-Wiwa led a nonviolent campaign against Shell as well as being critical of the Nigerian government. At the peak of his campaigning, he was accused of orchestrating the murders of four Ogoni chiefs, was tried by a military court and sentenced to death. He was hanged on 10 November 1995, and his execution provoked international outrage.

The Niger Delta is the biggest oil-producing region in Africa. The largest international oil company there is Shell. It operates around 50 oil fields and 5,000 km of pipelines, much of them ageing and poorly-maintained. The oil giant’s own figures admit to 1,693 oil spills since 2007, though the real number is probably higher.

In 2011 the UN Environmental Programme (UNEP) exposed massive levels of pollution caused by oil spills from Shell pipelines in the Ogoniland region of the Niger Delta. UNEP also exposed how the damage done to the environment and people was exacerbated by the company’s failure to clean up the spills properly. In response, Shell promised to clean up sites identified by UNEP and improve its response to future spills.

Yet in field investigations at four of the spill sites, UNEP identified as highly polluted in 2011, Amnesty and CEHRD found all four remain visibly contaminated. The investigation demonstrates this is due to inadequate clean-up, and not new oil spills.

The investigation shows Shell has not addressed problems over its entire approach to cleaning up oil pollution in Nigeria, including how it trains and oversees the local contractors that actually conduct the work.

One contractor who had been hired by Shell told Amnesty how superficial clean-up efforts fail to prevent lasting environmental damage: “This is just a cover up. If you just dig down a few metres you find oil. We just excavated, then shifted the soil away, then covered it all up again.”

Shell told Amnesty it disagreed with the two organisations’ findings, without providing any details. The company directed Amnesty researchers to its website, where little information about clean-ups was available. Shell also repeated its claim that most oil spills and pollution are caused by illegal activity, such as people stealing oil from pipes rather than poor maintenance.

In previous reports Amnesty and CEHRD have exposed as false, statements made by Shell about illegal activity and the extent of oil spills due to corroded pipes. In any event, Nigerian law says companies who own pipelines are responsible for cleaning up, regardless of the cause of the spill.

The report is part of Amnesty’s Clean It Up campaign, which calls on Shell to finally deal with the devastating impact of oil spills in Niger Delta.

The campaign features a new spoof video based on Shell’s own “Make the future” recruitment film, targeting engineering students, which is hijacked by Amnesty.

The spoof video asks: “What if we didn’t have to wait? What if Shell cleaned up over 50 years of oil spills?”