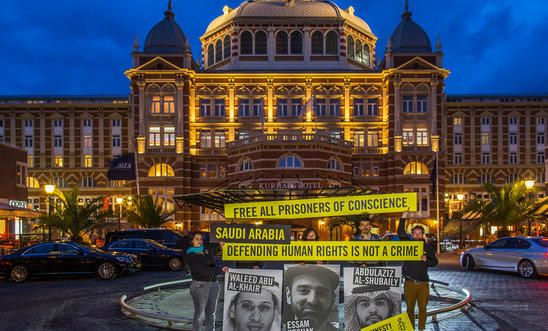 Responding to reports that Saudi Arabia’s public prosecutor is no longer seeking the death penalty for Israa al-Ghomgham, a female activist on trial for peacefully participating in anti-government protests in the country’s Eastern Province in 2015, Samah Hadid, Amnesty International’s Middle East Director of Campaigns, said:

“The news that the Saudi Arabian authorities have dropped their outrageous call for Israa al-Ghomgham to be executed comes as a huge relief.

“However, while her life is no longer at risk, she is still facing a ludicrous prison sentence simply for participating in peaceful demonstrations.

“Saudi Arabia’s prosecutors must now immediately drop their call for the death penalty against four other defendants facing trial alongside Israa al-Ghomgham. All have been detained for exercising their peaceful right to freedom of expression, association and assembly.

“Instead of treating peaceful protesters as criminals and resorting to extreme measures to intimidate them into silence, the Saudi Arabian authorities must ensure that Israa al-Ghomgham and all others detained solely for exercising their right to peaceful dissent are released immediately and unconditionally.

“The death penalty is the ultimate cruel, inhuman and degrading punishment - its use is horrific in all circumstances, but resorting to execution as a means to punish peaceful protesters in violation of international law is particularly appalling. The authorities must take steps to abolish the death penalty.”

Israa al-Ghomgham was arrested along with her husband Mousa al-Hashim in December 2015 for participating in protests for greater rights and reforms for the Shi’a minority in the eastern Qatif province in the aftermath of the Arab Spring uprisings.

She is facing trial before Saudi Arabia’s notorious Specialised Criminal Court which deals with counter-terrorism cases, along with five other individuals: her husband Mousa al-Hashim, Ahmed al-Matrood, Ali Ouwaisher, Khalid al-Ghanim and Mujtaba al-Muzain. They are facing a series of charges including “participating in protests” which is punishable under Royal Decree 44/A, a follow-up decree to the 2014 Law for the Crimes of Terrorism and its Financing.