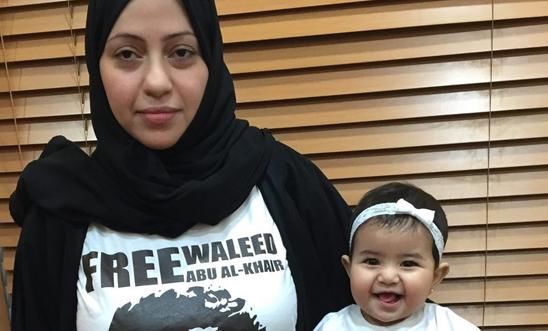 The arrest of Samar Badawi, a prominent human rights defender and sister of jailed blogger Raif Badawi, is the latest example of Saudi Arabia’s utter contempt for its human rights obligations and provides further damning proof of the authorities’ intent to supress all signs of peaceful dissent, said Amnesty International.

According to local activists, Samar Badawi was arrested in the morning on 12 January in Jeddah and taken to a police station along with her two-year-old daughter Joud. After four hours of questioning, she was transferred to Dhaban prison and is due to appear before a prosecutor on Wednesday 13 January. She is believed to have been arrested at least partly in connection with her alleged role in managing a Twitter account campaigning for the release of her former husband, the imprisoned human rights lawyer Waleed Abu al-Khair.

“Samar Badawi’s arrest today is yet another alarming setback for human rights in Saudi Arabia and demonstrates the extreme lengths to which the authorities are prepared to go in their relentless campaign to harass and intimidate human rights defenders into silent submission,” said Philip Luther, Director of the Middle East and North Africa Programme.

“Just weeks after Saudi Arabia shocked the world by executing 47 people in a single day, including the Shi’a Muslim cleric Sheikh Nimr al-Nimr, it has once again demonstrated its utter disregard for human rights. Samar Badawi has been arrested purely for peacefully exercising her right to freedom of expression, she must be immediately and unconditionally released.”

Samar’s brother, Raif Badawi, was sentenced to 10 years in prison and 1,000 lashes for setting up a website for public debate. He received the first 50 lashes just over a year ago. Last week Friday, Amnesty International held a protest vigil for Raif Badawi outside the Saudi Arabia Embassy in central London, reiterating the call for Badawi's immediate and unconditional release.

Both Raif and Samar Badawi are both prisoners of conscience who must be immediately and unconditionally released.

Samar Badawi’s former husband, Waleed Abu al-Khair, is serving a 15-year prison sentence also in connection with his work protecting and defending human rights in Saudi Arabia. Hundreds of thousands of Amnesty International’s supporters campaigned for his release during its December 2015 Write for Rights Campaign.