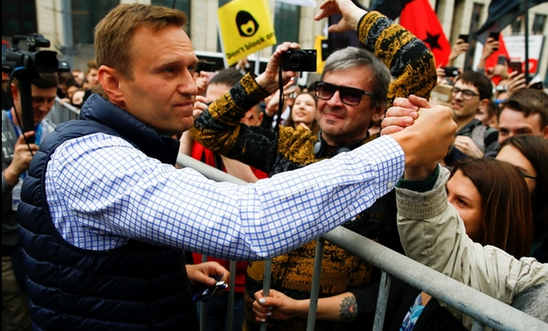 Following careful evaluation, Amnesty International has decided to re-designate Aleksei Navalny as a “prisoner of conscience”.

In February, Amnesty took an internal decision to stop using the prisoner of conscience term for Navalny due to concerns relating to discriminatory statements he made in 2007 and 2008 which may have constituted advocacy of hatred.

The Russian government and its supporters used that internal decision, which we had not intended to make public, to further violate Navalny’s rights. That was the height of hypocrisy, coming from a Government that not only attempted to kill Navalny by poisoning, but has carried out unconscionable acts over the past two decades, including torture, enforced disappearances and widespread repression of political freedoms in Russia and abroad, as well as war crimes in Syria.

We recognise that an individual’s opinions and behaviour may evolve over time. It is part of Amnesty’s mission to encourage people to positively embrace a human rights vision and to not suggest that they are forever trapped by their past conduct.

Moreover, when Amnesty designates an individual as a prisoner of conscience, this in no way involves or implies the endorsement of their views. Amnesty only concurs with opinions that are specifically consistent with the protection and promotion of human rights. Some of Navalny’s previous statements are reprehensible and we do not condone them in the slightest. As a human rights organisation, Amnesty will continue to fight racism and all forms of discrimination wherever they exist.

This means that by confirming Navalny’s status as a prisoner of conscience, we are not endorsing his political programme but are highlighting the urgent need for his rights - including access to independent medical care - to be recognised and acted upon by the Russian authorities.

Navalny has not been imprisoned for any recognisable crime, but for demanding the right to equal participation in public life for himself and his supporters, and for demanding a government that is free from corruption. These are acts of conscience and should be recognised as such.

In contrast, President Putin and the Russian government are restricting political freedom and brutally repressing anyone who seeks accountability and justice. It is they who are deliberately choosing to act without any trace of conscience.

Amnesty made a wrong decision, which called our intentions and motives into question at a critical time, and we apologise for the negative impacts this has had on Navalny personally, and the activists in Russia and around the world who tirelessly campaign for his freedom.

It is Amnesty’s firm commitment to actively fight injustice and oppression wherever it occurs. The Russian state is condemning Navalny to a slow death. That must end immediately.